Maybe I’ve been in the bathroom remodeling business too long but I actually think shower enclosures can be sexy. I might have looked into a few too many multi-functioning spa-shower heads, sleek deluxe wall panels and even drains with LED lights and my brain has gotten mushy with visions of stylish new showers. Even though I am more than a bit passionate (OK – maybe a bit touched) about shower enclosures, there is nothing sexy about a shower enclosure which has failed!

Does your existing shower resemble these remarks?

Yes – a newly designed sleek shower can be sexy – but your old shower may be so “un-sexy” you feel the need to (pun-intended) “throw in the towel” on it! If you’ve gotten to the breaking point with your existing shower,  don’t only look at what’s sexy and new in shower products (although that’s a lot of fun). You need to take a look at the nuts and bolts of why showers fail so you won’t go down this “bad shower road” again.

In this article I’m going to challenge you to take a look at 5 “non-sexy” tips to make sure your next bathroom remodeling project doesn’t lead down failure lane. So let’s roll up our sleeves and look at these tips so you can (as Larry the Cable Guy would say) get ‘er done right the first time. 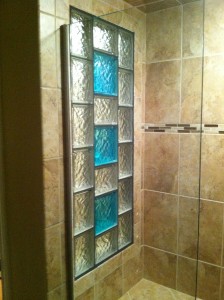 Let’s face it – how to replace a shower window can be very difficult to figure out. Many bathrooms in older homes have wood or metal double hung windows right in the middle of the shower/tub area. While this was not a problem when these homes were built in the 1940’s, 1950’s and 1960’s (when more people took baths vs. showers) they just aren’t practical any more. The water from the shower penetrates the wood or metal frames in a shower and causes the frame to decay or rust. So how do you solve this problem without losing the benefit of natural light, increases safety and air flow and moisture control of having a window? Read below about 3 possible shower window options and their advantages and disadvantages.