Let’s get real. There’s no such thing as a perfect shower pan, just as there’s no perfect person. Shower pans are not a one-size-fits-all proposition.

There can be, however, a perfect shower pan for your specific situation.

Here’s the problem you’ve likely run into trying to find the perfect shower pan for your job. When you visit shower base manufacturers web sites what do you think they’re pushing? This is not a trick question.

They’re pushing their pans. They’re claiming their units are the ‘ultimate fighting warriors’ against all shower evils. They have the best pan known to man, woman and child (as if kids are even interested).

You’re left to sift through the B.S. You’re left to read on-line reviews (to the extent you have the time and desire to do this). You’re left to come to your own conclusions (even though you’re not a bathroom remodeling – or shower pan expert – and don’t play one on TV. Come to think of it, no one plays one on TV either).

As a guy who leads a business which daily is knee-deep in wholesaling and installing different types of shower bases, I’ve had the ‘pleasure’ (sarcasm intended) to see the good, the bad and the ugly in shower pans in our journey to make bathrooms great again (OK – if I’m being hones, most bathrooms weren’t great in the first place).

The goal of this article is simple. It’s to help you find the perfect shower pan for your situation. To do this we’ll look at different goals you may have. Here’s some popular shower pan goals. See if yours is on the list.

So, now that you’ve checked out the 6 goals, let’s dig into the brutally honest guide to the perfect shower pan which will help you achieve you find the best one for your situation. 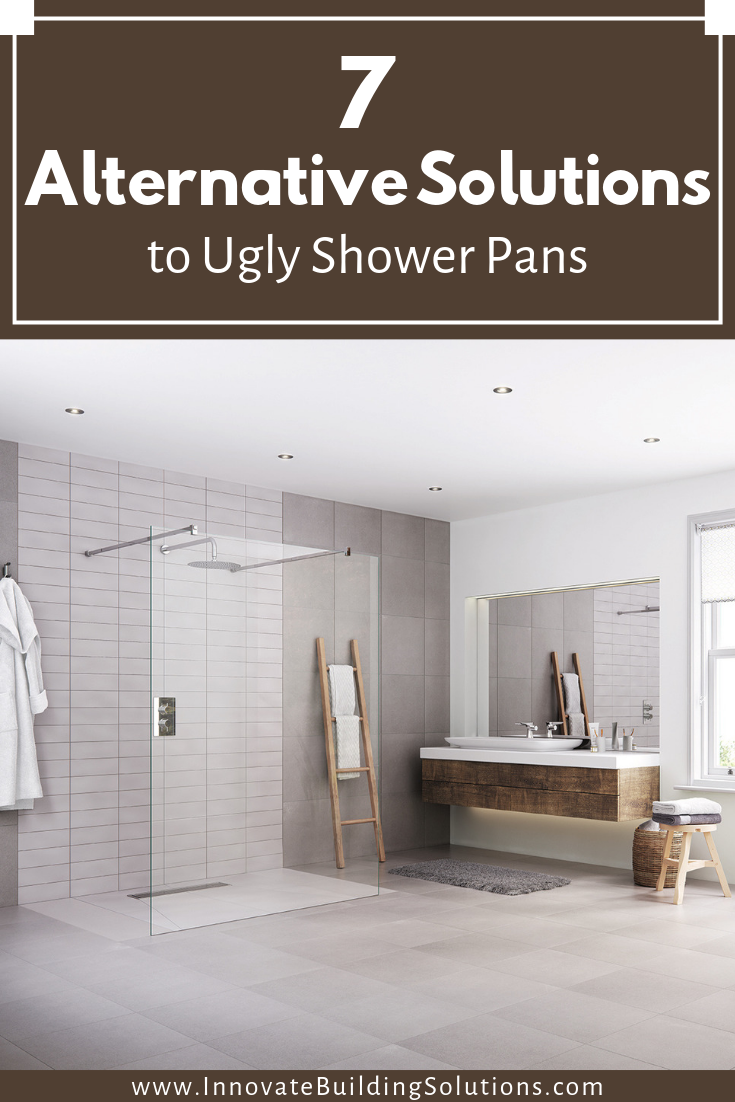 The moment before you crank-up your reciprocating saw, rent the jackhammer or bring out the hand tools to demo your old fiberglass or tile shower pan do you look down and say to your shower base, “I’m going to miss you buddy. I’ve loved our time together.” If so, you may need psychological help.

The words used to describe shower pans don’t come from a place of love. More common words would be its ugly, disgusting, moldy, dangerous (but not in a ‘Baker Mayfield’ of the Cleveland Browns sort of way), grimy, yellowed or grungy. Negative words about shower pans could go on and on.

No where on this list is beautiful, sleek, contemporary, durable, shapely and safe.

What if your shower can could be stylish and safe?

What if your shower pan wasn’t the ugly red-headed-stepchild (sorry red headed stepchildren out there) of your shower enclosure or roll in shower?

What if you could be as proud and thankful about your shower pan as you were when your son FINALLY completed his 6-year college plan, and picked up the long-sought-after sheepskin (are diplomas actually made of sheepskins?) from State U?

I’m here to announce there are cool and safe alternatives for ugly shower pans. You don’t have to put up with cheap, clunky, yellowed fiberglass shower bases any more. You don’t have to deal with teeny-tiny tiles with fat grout joints which get dirty, moldy and bring you (literally) to your hands and knees.

When you think about it, your shower base is THE FOUNDATION of your shower. If it fails, everything above it becomes garbage. Money down the drain (literally and with a bad shower pan pun thrown in for bad measure).

As Gene Kranz said in the movie Apollo 13, “Shower base failure is not an option.” (OK – maybe the shower base portion of the line was left out to keep the movie tighter).

In this article I’ll present 7 alternative solutions for standard-sized, custom and roll in shower pans. Don’t accept the first clunky fiberglass shower pan your remodeler grabs off the home center shelf. Don’t accept ‘old-school’ mud set tile shower floor pans which are a pain in the drain for you to maintain. 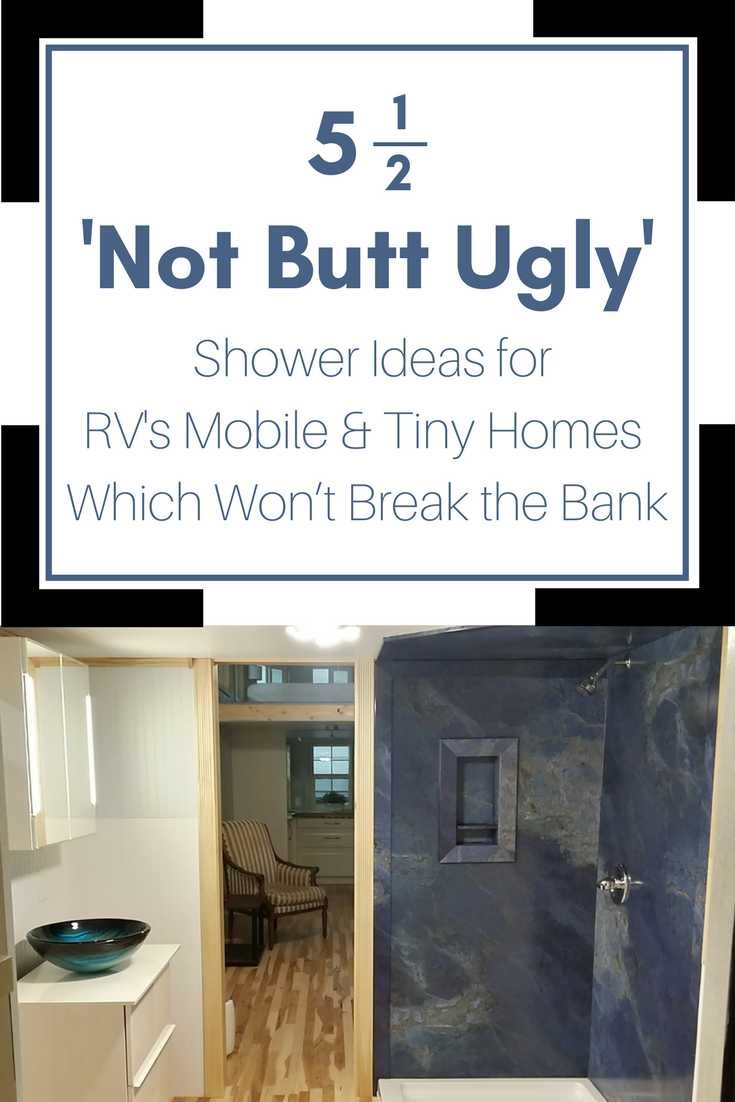 My Dad used to tell me, “Mike, you can’t fit 10 lbs. of s*** (insert swear word here) into a 5 lb. bag.” My Dad was quite the creative guy (both in his fun use of words and in business – which was his passion). If he was alive today to experience the tiny home, mobile home, RV and converted bus movements, I could hear him amend his quote to add, “You can, however, fit more than 10 lbs. of coolness into a tiny home bathroom with only 5 pounds of space!”

Owners of tiny homes, mobile homes, converted buses know that ‘great minds DO NOT think alike.’ (note – I love this saying from Lawrence School – a school for kids with learning differences both of my boys attended).

Great minds create, innovate, figure out a way when everyone else says, “No way dude!”

When it comes to tight bathrooms in mobile-friendly vehicles (whether they are on land or ‘sea’) you’ve got to think outside the confines of the boring, white 32” square fiberglass one-piece shower (which will look like 10 lbs. of s*** in a few years anyway).

You need to find creative materials for your shower which will work day in and day out.

You need to think about fun materials which will show your unique sense of style and personality. After all you didn’t get into a mobile-type home just to have a generic place to rest your head at night.

You need to think of products you can install yourself (or pay some buddies with a good steak-dinner to help you install) which won’t break the bank (or if they do break the bank, it will be worth it).

In this article, my goal is to show you 5 ½ ‘not-butt-ugly’ shower ideas which will put the WOW into your tiny mobile-friendly bathroom. These ideas will work whether you’re building a new tiny home, remodeling or retrofitting an existing Airstream, houseboat or even a full-sized bus. Although I’m presenting 5 1/2 ideas here for you –your imagination is limitless – so at the end of the article I’d love to hear your comments about other cool shower ideas you’ve seen. Give me your opinion on whether the ideas I’ve presented deserve an enthusiastic thumbs-up or a rousing thumbs-down. 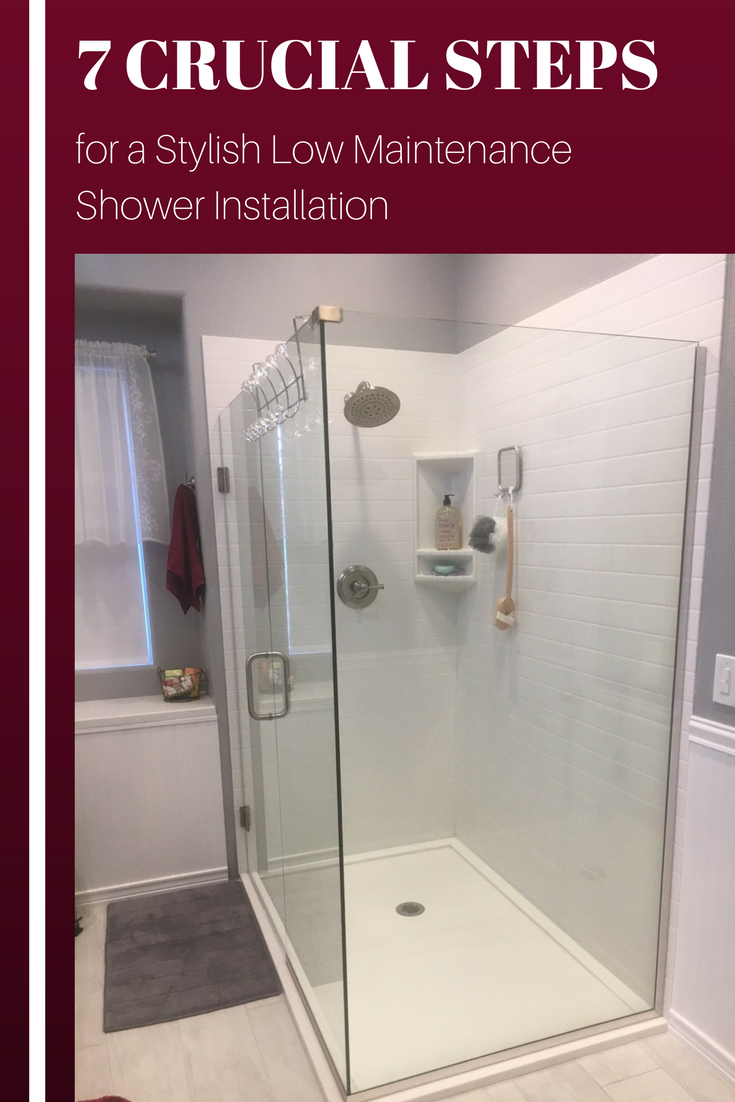 I took the all-too-familiar call from James and his wife Linda.

Linda started out saying, “Mike – I HATE the ugly white fiberglass stand up shower in our hall bathroom, and the tile shower in the master is a mess. The grout joints are black and nasty. I’ve finally convinced James it’s time to blow up these 2 bathrooms now that the kids are “mostly” grown and out of the house (she mentioned her son Michael was on the 6-year college plan and almost ready to graduate). I am not going to deal with the maintenance or an ugly shower again. I’ve had it.”

James chimed in and said, “Linda and I went to the local big box store only to find the same crap we have right now. Lots of ceramic tiles. Basic cheap fiberglass shower pans and walls in stock sizes which won’t work for our tile shower. I am thinking about installing this job myself. I tried to ask the guy with the orange smock the steps to get this job done. He was clueless. Linda and I need your help with two things. First, what stylish, low maintenance products are out there? Second –I’m not sure what the right installation steps are. Can you help us?”

I understand where Linda and James are coming from. As a homeowner – no matter how handy or construction-savvy you are – you’re not researching shower products or installing a new shower every day (hopefully this will be the first and LAST time you do this). So – if you want a cool shower, which isn’t a pain to clean and maintain and don’t want to screw up the install (or have a contractor you hire mess it up either) you need to know the right steps to “get ‘er done” (as Larry the Cable Guy would say) right the first time.

In the article below I’ll look at 7 crucial installation steps I shared with Linda and James for a stylish low maintenance shower. For this project I would recommend to take your time. Be methodical. When you get this job done using the right steps, you’ll end up with the shower which is cool AND done – once and for all!

Maybe I’ve been in the bathroom remodeling business too long but I actually think shower enclosures can be sexy. I might have looked into a few too many multi-functioning spa-shower heads, sleek deluxe wall panels and even drains with LED lights and my brain has gotten mushy with visions of stylish new showers. Even though I am more than a bit passionate (OK – maybe a bit touched) about shower enclosures, there is nothing sexy about a shower enclosure which has failed!

Does your existing shower resemble these remarks?

Yes – a newly designed sleek shower can be sexy – but your old shower may be so “un-sexy” you feel the need to (pun-intended) “throw in the towel” on it! If you’ve gotten to the breaking point with your existing shower,  don’t only look at what’s sexy and new in shower products (although that’s a lot of fun). You need to take a look at the nuts and bolts of why showers fail so you won’t go down this “bad shower road” again.

In this article I’m going to challenge you to take a look at 5 “non-sexy” tips to make sure your next bathroom remodeling project doesn’t lead down failure lane. So let’s roll up our sleeves and look at these tips so you can (as Larry the Cable Guy would say) get ‘er done right the first time. 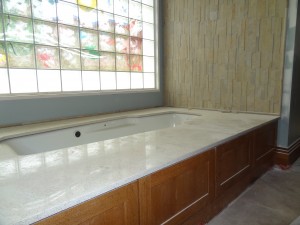 Seldom does a new home building project come along that can inspire, educate and liberate any person’s ability to use and enjoy the home than the Universal Design Living Laboratory (UDLL) being built by Rosemarie Rossetti and her husband Mark Leder. Several months ago (see the related blog post below) I focused on one feature in this home (the glass block windows and glass mural window used in the master bathroom). In this post let’s look at some features in the master bathroom to see thoughtful universal design and green building practices in action (Please note – this home – which is being built in Columbus Ohio – will be open for public touring later this year or early next year).