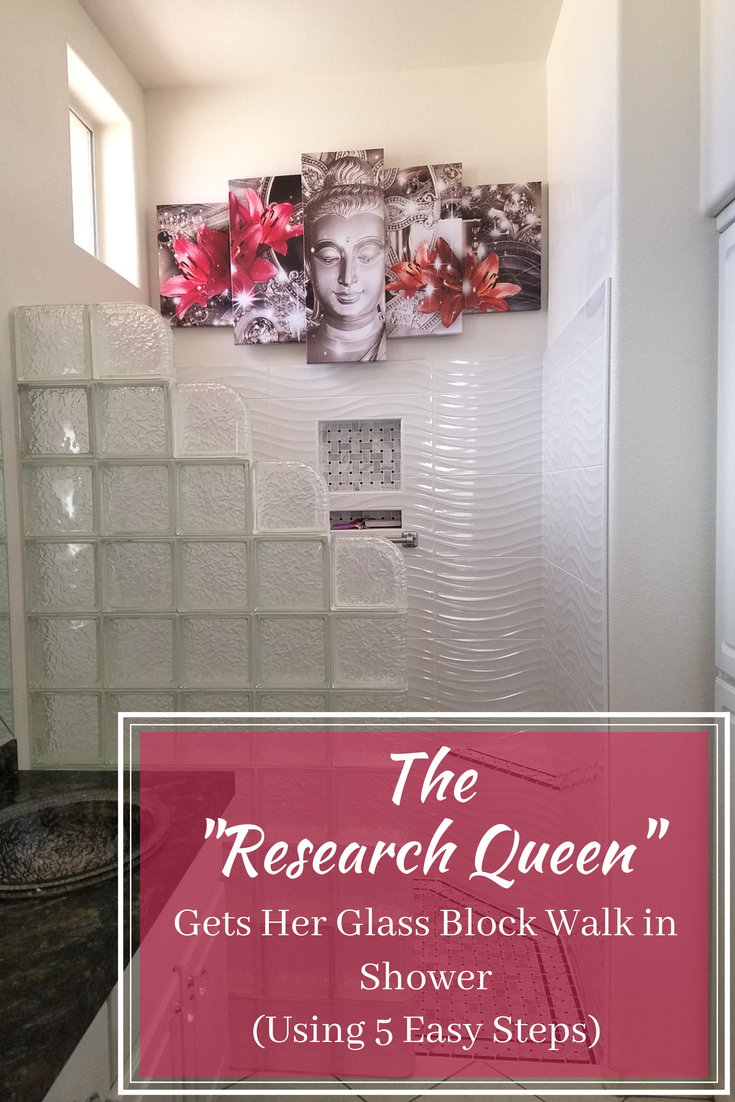 Educators are creative. They’re industrious. They pursue knowledge with reckless abandon. They’ll encourage you. They’ll give you feedback (whether you like it or not). They’ll throw in a dash of their personality to make sure you’re awake (and learning).

Right now, you’re probably asking, “Mike – what does this description of an educator (or teacher) have to do with a glass block walk in shower in a bath remodeling project?” Good question.

When it comes to fun, creative and successful DIY bathroom remodeling projects, I’ll tell you they all begin with education and learning. You’re digging into products, installation methods and resources to get your arms around the unknown (especially if you’re doing a job for the first time).

These ‘resources’ could be your next-door neighbor. They could be a local contractor or supplier. They could be a company 2,006 miles away (in this project the distance from Las Vegas Nevada to Columbus Ohio – where the glass block shower system was built).

Here’s where our ‘research queen’ comes into the story. The queen in this ‘construction story’ is Geri David of Las Vegas, Nevada.

While Geri would describe herself as a ‘retired educator,’ I will tell you she is (and will always be) an educator. You see Geri ‘met’ me, long before I met her. Here’s how.

Geri had a vision.

Geri’s vision was an open walk in glass block shower. It wouldn’t look ugly like her current builders-grade obscure glass, framed sliding door with a dingy fiberglass base.

Geri’s shower would be doorless. She wouldn’t have to ‘fight’ cleaning hair and dirt out of a metal shower door frame. She wouldn’t be scouring the Net looking a shower curtain which wasn’t butt-ugly.

Geri would put in the time, energy and relentless keyboard-burning research to make her vision a reality, at a price she could afford. This is where I showed up in this story.

Fortunately (or unfortunately for Geri) her research on Houzz, Pinterest and Google kept leading her back to me. You see I’m a ‘construction educator’ (AKA a blogger on all-things bathroom remodeling- and in this case a glass block shower). I guess to Geri I ended up being the bad rash she just couldn’t get away from (my wife of 34 years – Rose – knows this feeling all too well – ha! Ha!).

If you’re like Geri and hate your framed shower doors, fiberglass shower walls and or shower curtains but are unsure if you have the space and ability to make a walk-in shower (or glass block doorless shower) work, you’ll want to read further.

In this article I’ll give you a ‘behind-the-scenes’ look showing how Geri took her creative vision, put in the ‘finger-grease’ (i.e. Internet research) and assembled a team to make a walk-in glass block shower work in her small bathroom. Along the way Geri (like an excellent educator) gave out praise – and wasn’t afraid to let others know where they need to improve their ‘grades’.

Let’s stroll through 5 steps of Geri’s journey to a successful glass block walk in shower.

Step #1 – Embrace your creative vision, but make sure you don’t end up with ‘a big, fat, gypsy bathroom.’

Have you ever woken up with a FABULOUS idea? You wrote it down immediately. Then came back once you were out of your sleep-induced haze and said, ‘what was I thinking?” One saying I use is ‘I’ve loved all my ideas initially, it’s the eventually which sometimes has gotten me!”

As Geri told me, “Mike, I didn’t want my bathroom to end up looking like my big fat, gypsy bathroom. I wanted a bright, beautiful space which wasn’t too busy. It needed to blend.” Hopefully it wouldn’t be a funny blend of materials like Blendtec YouTube videos below:

Geri already had fun elements in this bathroom. A metallic leather countertop installed 2 years ago. Glass sinks with LED lighting for the ultimate nighttime effect. A waterfall faucet. The dilemma was how to make the new walk in shower work with these existing features yet provide a distinct open space. 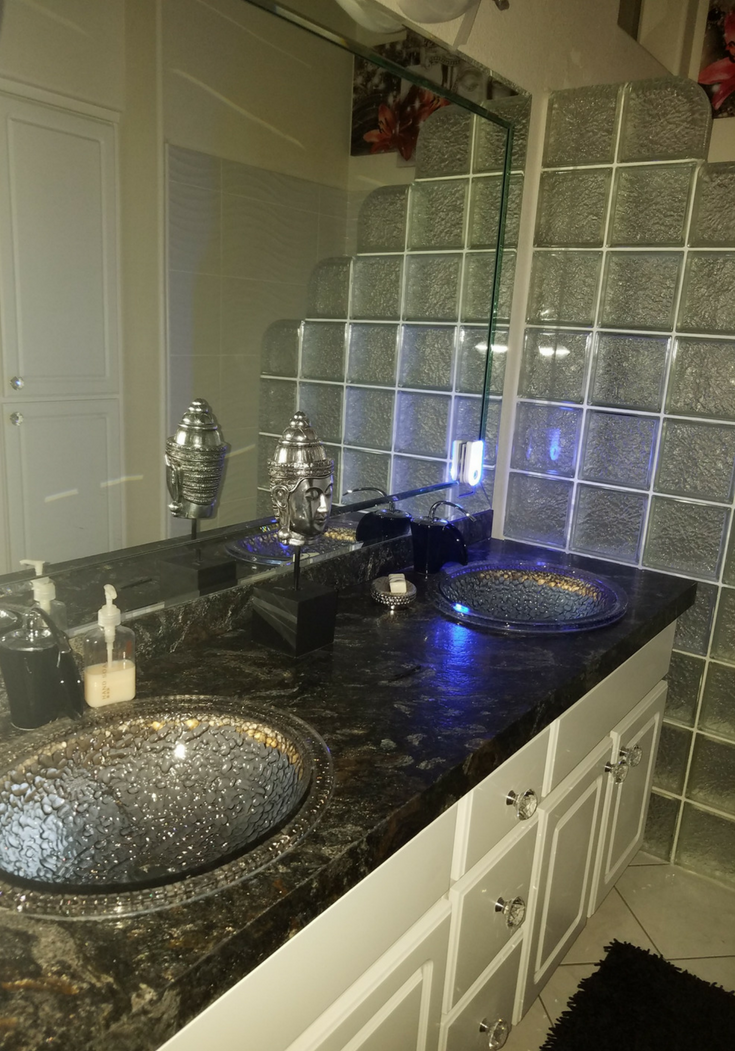 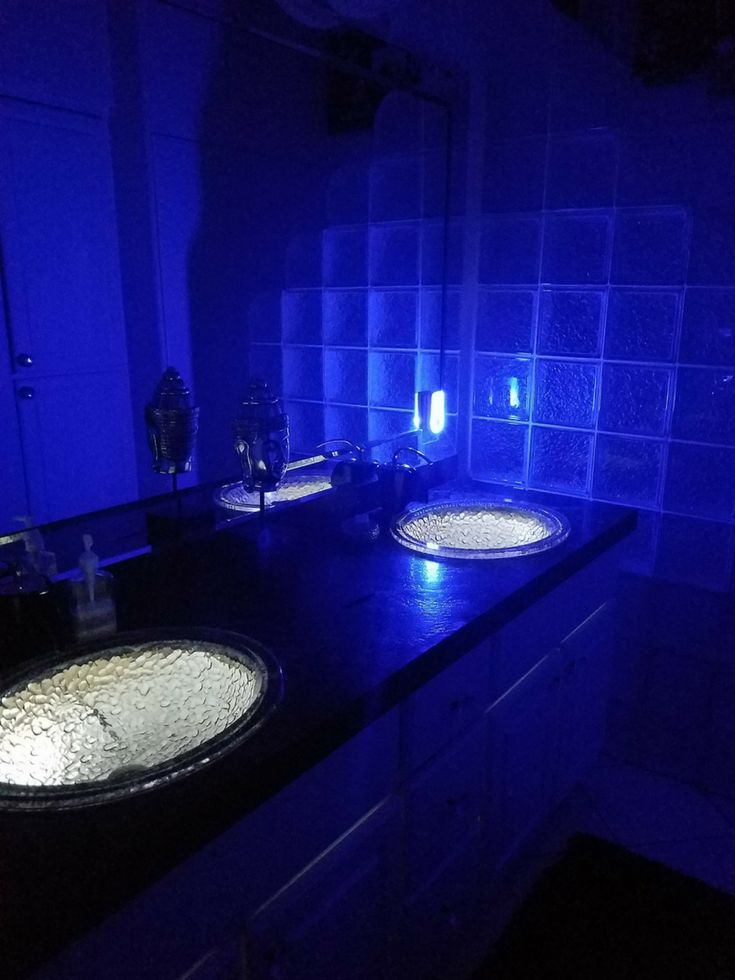 Geri wanted the glass block wall as the focal point. She chose the “Icescapes” pattern blocks which doesn’t show spotting (anyone who HATES cleaning clear shower doors can appreciate that benefit!). Next, she wanted a sense of depth and interest. She found it with the 3 dimensional white 1’ x 2’ wave tiles. Finally, the shower floor was completed with a fun basket weave pattern. 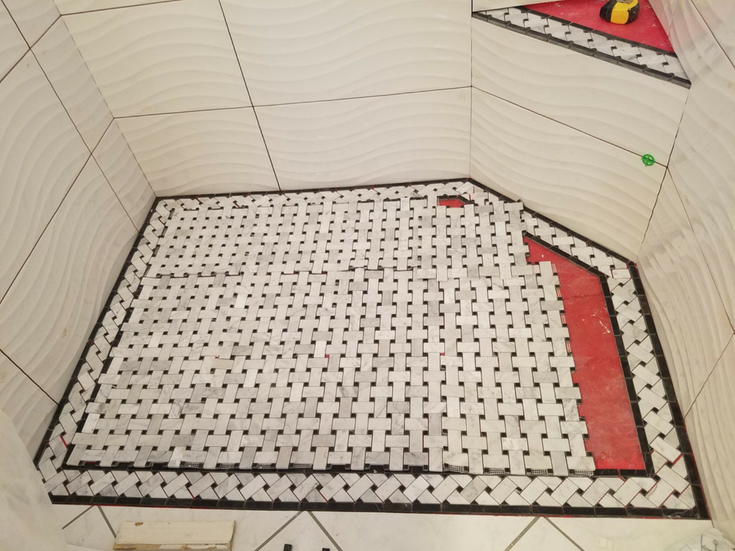 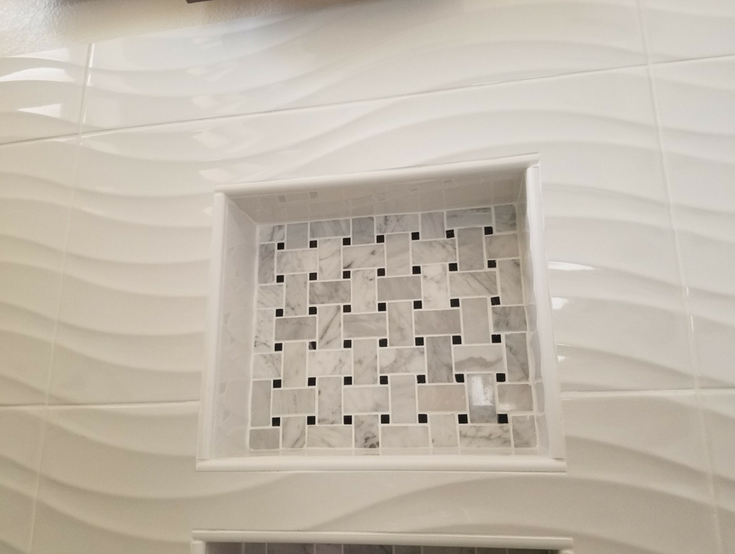 I think Geri achieved her vision of a bright, open, easy to maintain shower (which works with the rest of the bathroom). What do you think?

Just because you have a vision of a finished project in your head (through divine inspiration or through your research ‘virtual perspiration’) doesn’t mean your vision is practical (or affordable).

As Geri knows an Internet search journey can create high and lows along the way. Here’s two examples of ups and downs Geri experienced which ultimately lead her to the right design and the right price for her job. 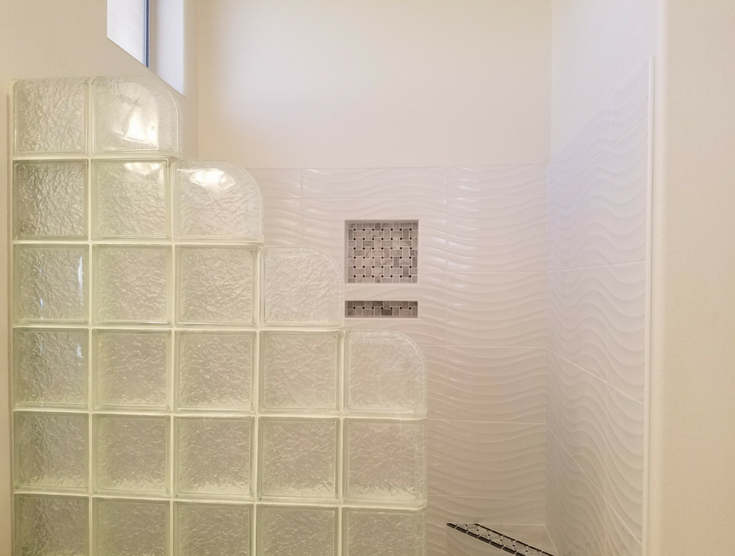 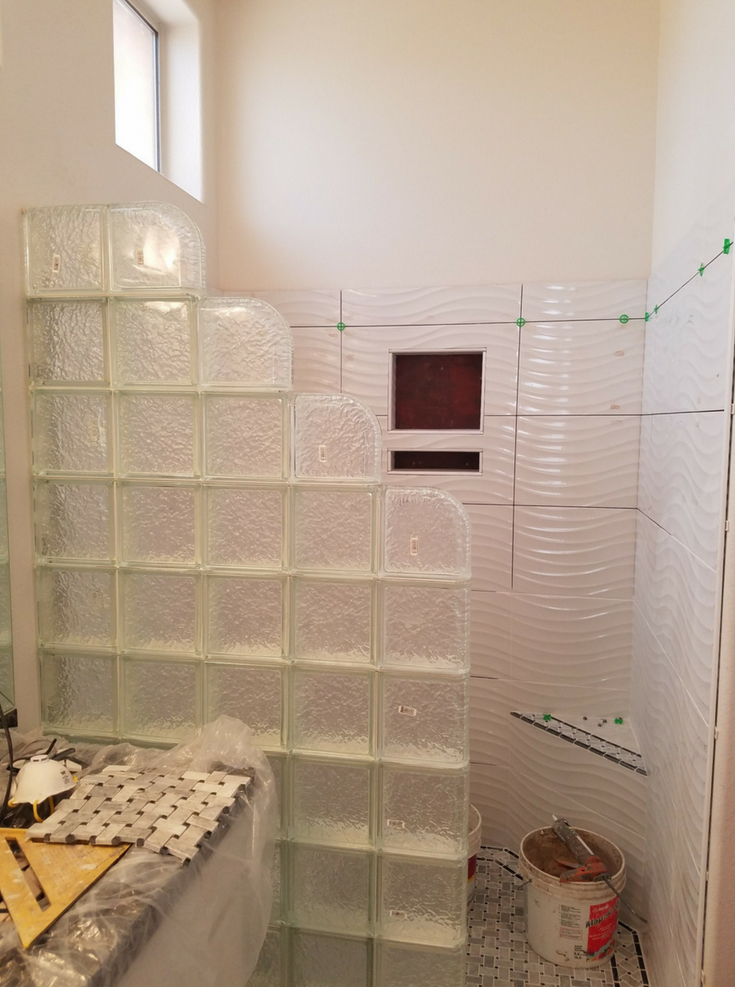 While Geri is the ‘Queen of Research’ she isn’t the ‘King of Installation’ or the ‘Prince of Bathroom Products.’ She recognized it would take a village (i.e. the right group of people) to make her dream bathroom a reality.

For example, when I asked Geri if she got any pictures during the installation of the block wall portion of the project she said, “No Mike, I didn’t. When Vic (my husband) and Mario (our contractor) got moving they had the prefab shower wall up in an hour. These guys are so good (and efficient) before I looked the wall was up before I could get any in-process pictures!” 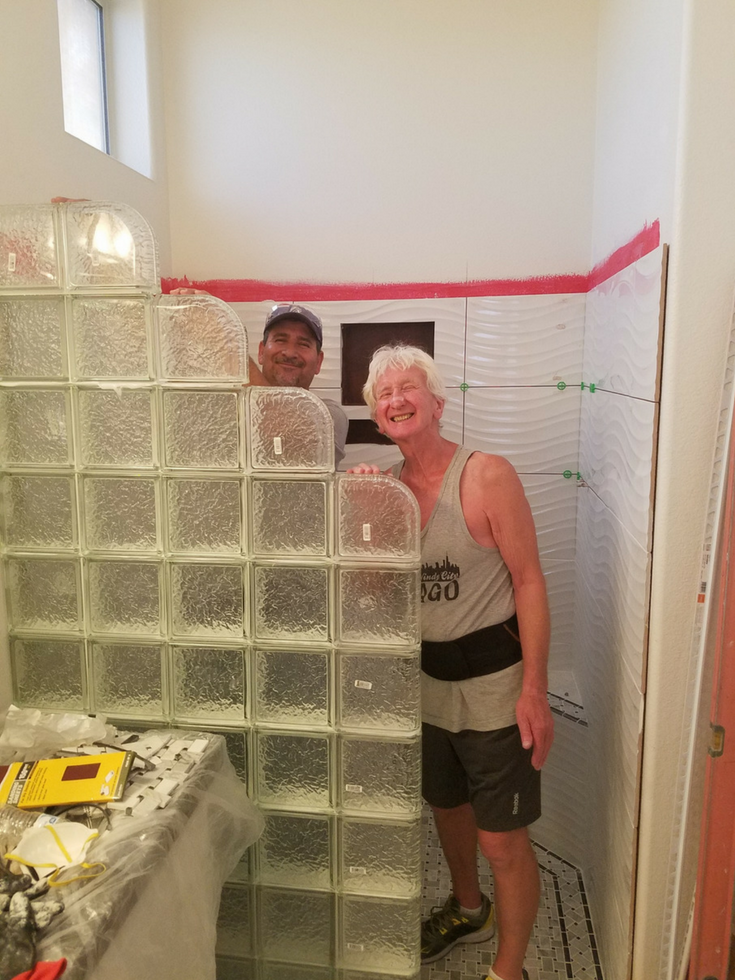 In addition, when it came to design the glass block shower wall, Geri and I invested time combing through styles, sizes and finishing options before arriving at the 40” x 80” high Icescapes pattern wall with a stairstep design.

Successful remodeling projects are not the work of one person. It takes a ‘team’ to make them shine (OK- that’s a bad pun when you’re talking about glass!).

Remember when your kids were in elementary school and the teacher gave them an ‘N.I.’ (i.e. needs improvement) grade on their report card? I grew up before this ‘feel-good’ grading system existed. However, I still vividly remember when my Dad tore down my Batman poster when I got 2 D’s back in the first grade (I’m still working with my analyst to get through this trauma – just saying Dad!).

All joking aside, feedback (even if it’s not uplifting) is critical for shower products and installation processes to improve. In every project there are things which could be done better, and sometimes you and I can be ‘too close to the action’ to see our own ‘N. I’s’ (needs for improvement).

Geri pointed out where our installation instruction sheet needed to be clearer. Vic and Mario let me know they would have liked our wall anchors to be made with a thicker grade of metal.

Just like an excellent educator, Geri was there to ‘grade’ my business, but she also offered up encouragement.

Step #5 – Appreciate and encourage along the way

Think back on your favorite teachers in grade school, middle school, high school or college. I’ll bet they have one thing in common. They made you feel good about you. They spurred you on. They were your ‘cheerleader.’

I can’t tell you how many times Geri emailed me and told me she appreciated my help. When it comes right down to it we’re all fueled to do a top-notch job and go the extra mile when we’re encouraged.

If you want a first-class shower remodeling project take a cue from Geri and give kudos where they are due. Appreciate your contractors, suppliers and (even your get-your-hands-dirty DIY’ing) husband!

While most people wouldn’t think of a teacher to be the perfect person to lead a DIY shower remodeling project, it makes perfect sense to me.

In this case, Geri took her vision and researched with abandon ways to turn the concept in her head into a stylish shower she could afford. She involved others with skills she didn’t have. She added the sweet (encouragement) and sour (necessary feedback) sauce for success (I bet you can guess I love Chinese food from that analogy).

As a personal note, Geri, I can say from one ‘educator’ (in my case a construction educator/blogger), it’s been fun working with another educator to make your dream shower a reality!

How can I (or my team) help with your glass block shower project?

If you’d like assistance designing a glass block shower and/or getting prefab sections and a ready for tile or cultured granite shower pan call  me or my team at Innovate Building Solutions at 877-668-5888. For a local installation service and supply contact Columbus Glass Block at 614-252-5888 or Cleveland Glass Block at 216-531-6363.