How much does a prefabricated glass block walk in shower wall cost? 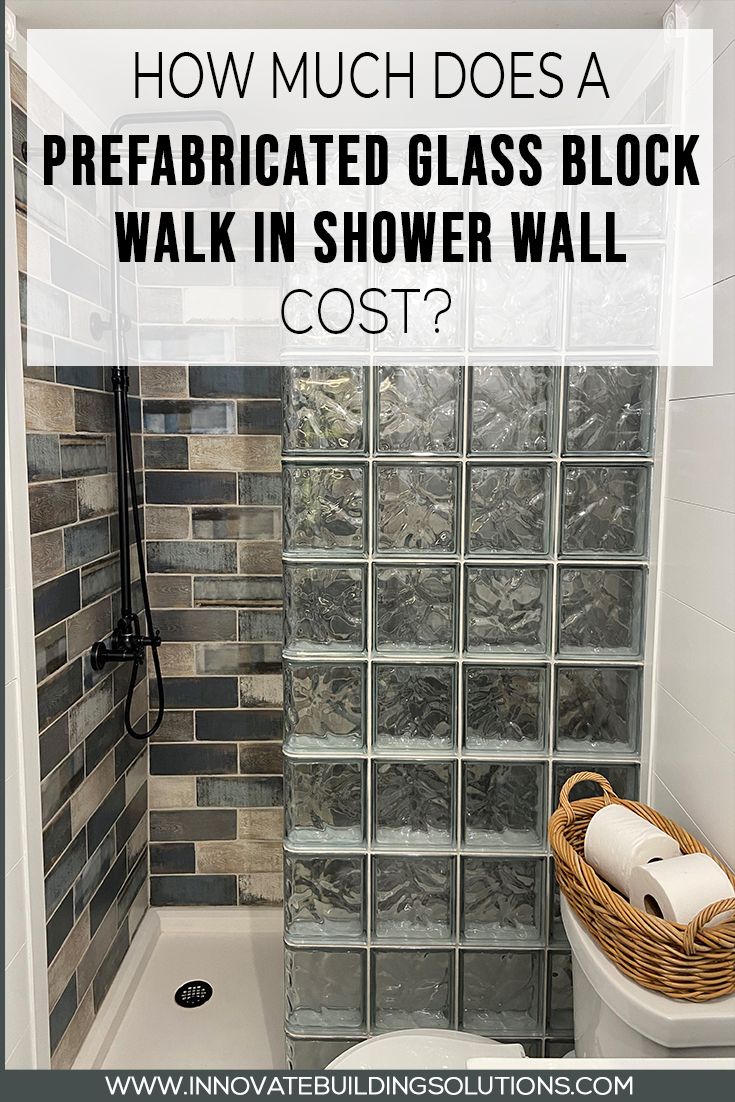 If I’ve been asked this question once, I’ve been asked it tens of thousands of time (after all it seems like I’ve been leading a company which fabricates, ships nationwide and installs glass blocks since Moses was a boy – or at least since 1985 to be exact). That question is….

“So, Mike, how much do your glass block shower wall kits cost?”

Since most of our customers aren’t independently wealthy (and as a matter of fact NONE OF THEM – SO FAR – HAVE BEEN – or at least to my knowledge) knowing the cost is critical. You need to know if you can afford a glass block shower or not. And just like the answer to the question, “How much does a new home cost,” I could give you the standard response…it depends.

However, that B.S. answer does you NO GOOD! And I know that.

So, here’s what I’m going to do to make the cost of these prefabricated glass block wall panels clear to you.

In section 1, I’ll explain what a prefabricated glass block shower wall kit is and why you should get one instead of (trying) to muddle through a block by block installation. Or worse yet, searching for a ‘needle-in-a-haystack’ bricklayer you’ll (most likely) have to BEG to do your glass block job.

In section 2, I’ll ‘build up’ the pricing for you. We’ll look at the cost of a straightforward (and straight in design) 32” -36” wide x 80” high prefab glass block wall. Then I’ll get fancier and show how cost is impacted if you build a curved wall (which is most common for walk in showers), or want a funky multi-block system or want to throw in colored or frosted glass blocks or do a ‘step down’ design.

In section 3, I’ll give you practical tips to design a glass block shower, so you don’t experience a ‘customer-project-cost-gone-wild’ moment due to poor design. After all I’ve been working with homeowners, contractors and our shower wall panel dealers for years. And quite frankly, I’ve seen more than my fare share of homeowners calling me with glass block shower project horror stories.

Section 1) What is a prefabricated glass block shower kit? Why should you use one vs. installing the blocks one by one?

The main element in a prefabricated glass block shower wall kit are the premade sections. These sections have vinyl spacers running vertically and horizontally through the blocks. These spacers make them stronger than a ‘block by block’ mortared assembly. In most cases sections are 2 glass block high (which is 16” since most of the finishing end blocks used are 8” tall). The glass block shower kit comes with anodized aluminum anchors (which are locked into the vinyl sections) to tie the glass block wall to your stud walls. 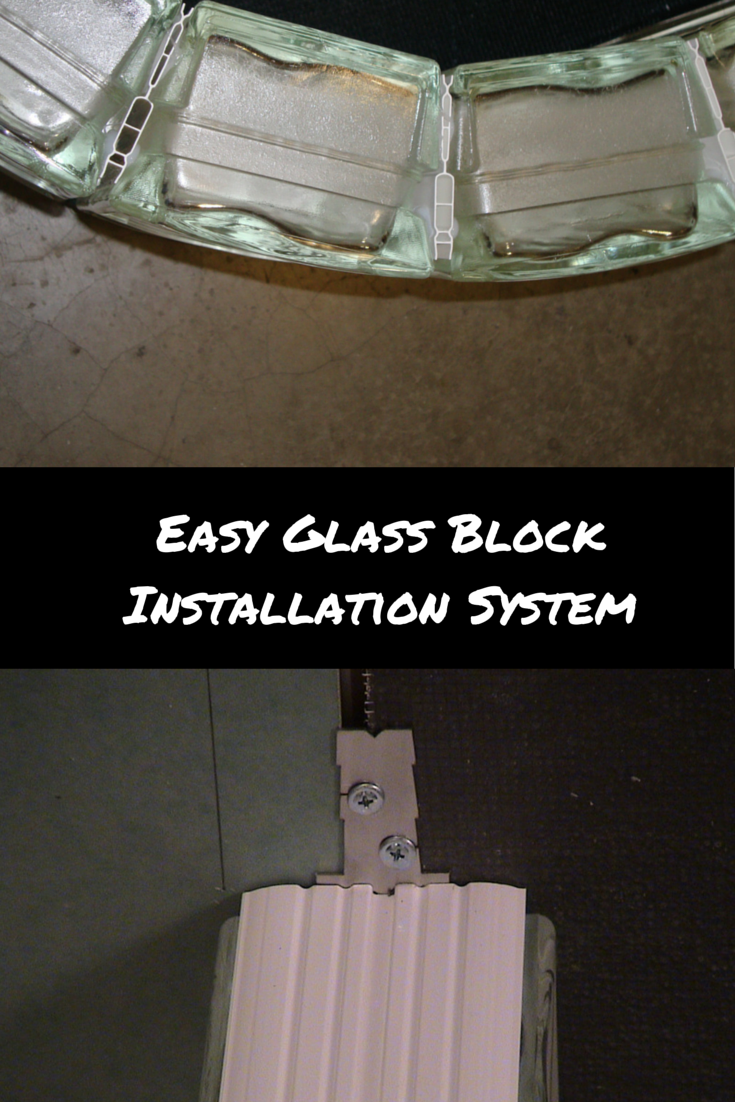 In this kit you’ll also get silicone to join the panels together. Installing glass block shower panels is like putting together Lego blocks (and who doesn’t love that?).

You may be asking why you should use prefabricated sections to build your wall? 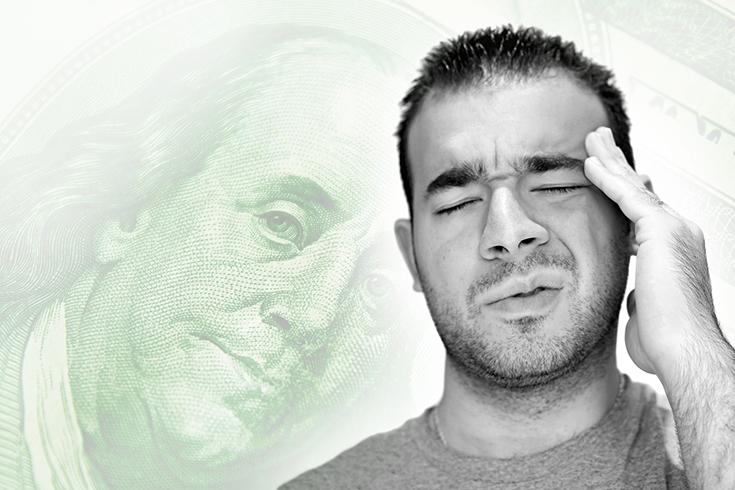 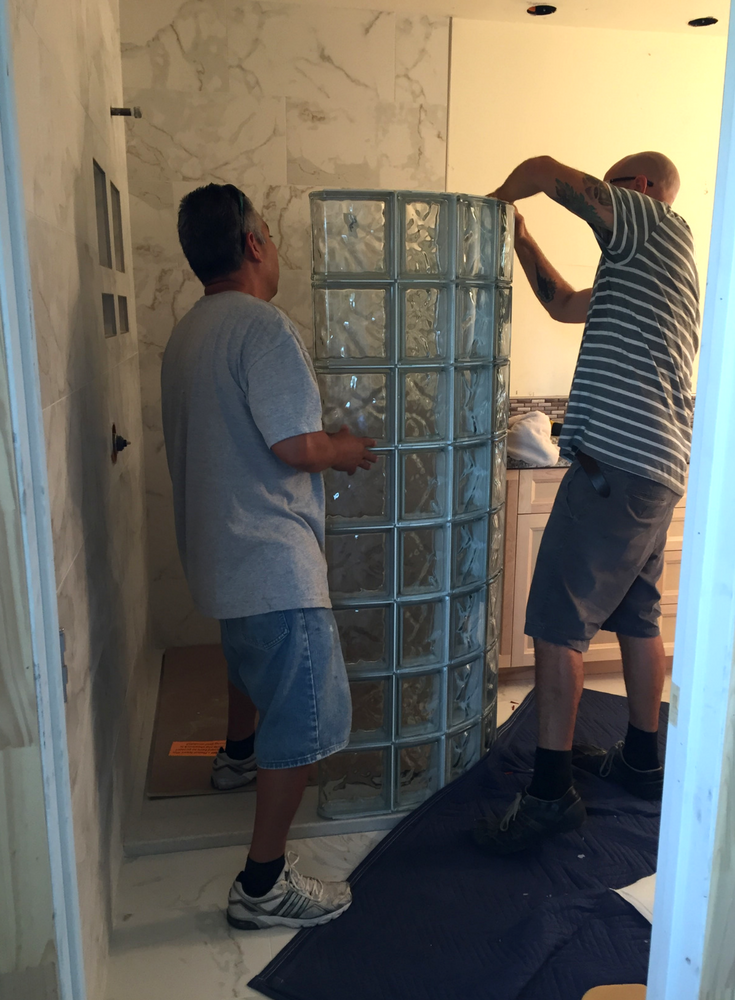 Section 2 – What does a prefabricated walk in glass block shower kit cost?

In this section, I’m going to ‘build up’ (no pun intended) the cost of a prefabricated glass block shower wall kit. These kits include anchors, silicone and premade panels (note: grout to finish the joints is sold separately).

The most common sized glass block prefabricated wall is either 32” x 80” high or 36” x 80” high with a finished rounded block on the end. The reason the 80” high is ‘magical’ is this height ensures no water comes over the top of the wall and onto your bathroom floor. You can expect to spend between $1,000 and $1,200 for this wall. 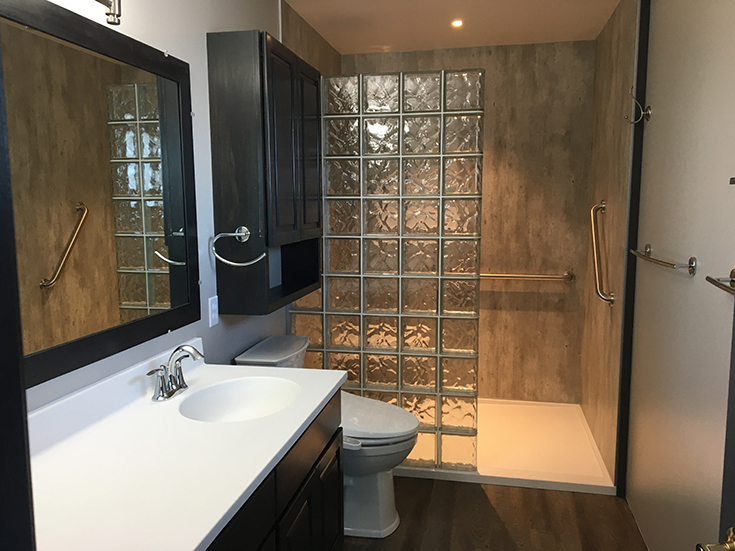 Curved glass block walls are popular not only because they look cool, but also because they eliminate the expense of a shower door (because their curvature directs water back towards the drain). A curved glass block design will add between 20-35% to the cost of a straight wall depending on the number of curved (also called ‘radial’) blocks in the wall. 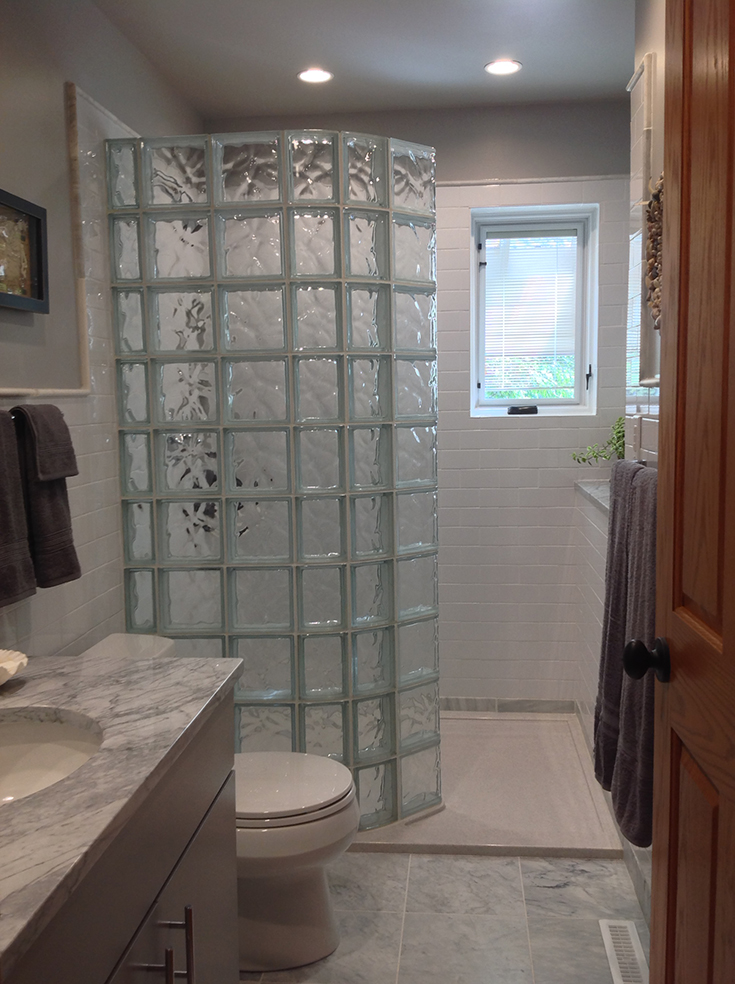 Laying one glass block on top another is ‘fine’ (and yes guys out there using the word ‘fine’ IS NOT recommended if your wife or significant ‘utter’ asks you how her dress looks!). However, fine is simply ordinary. In a world where people want to be ‘extra-ordinary,’ funky glass block shower designs with a bohemian, eclectic multi-block look have taken off.

Mixing up sizes, patterns and designs styles is fun and whimsical (to go a little ‘designer-esque’ on you). In addition, creating a stained-glass look without the frailty of actual stained glass with lower-cost glass blocks is smart. 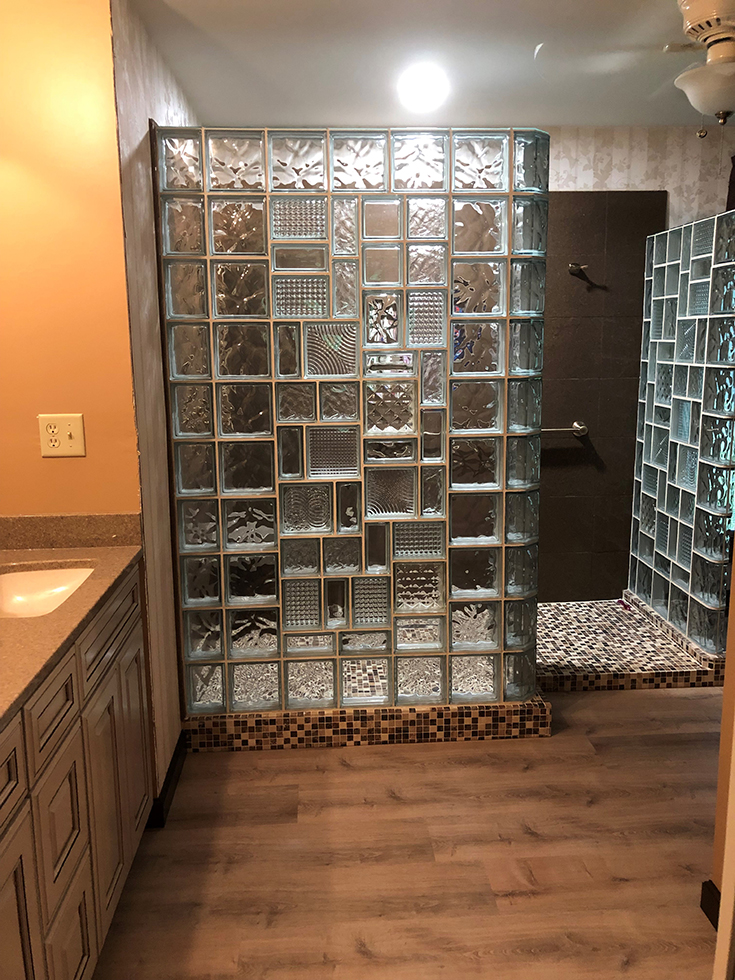 While ‘mixed up’ design costs can vary according the number of blocks and patterns (and how complex the prefabricated build is), as a general rule use a cost of 2 to 2.5 times the cost of a straight wall for a funky glass block design. In the end these projects are more than just ‘any old wall.’ They’re a work of art! 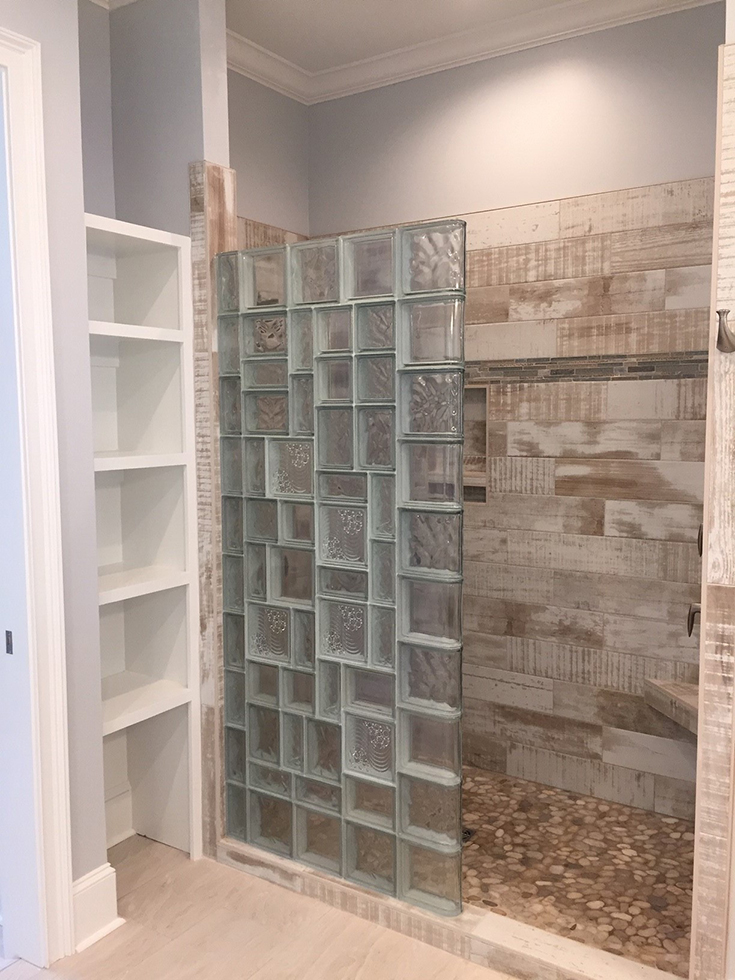 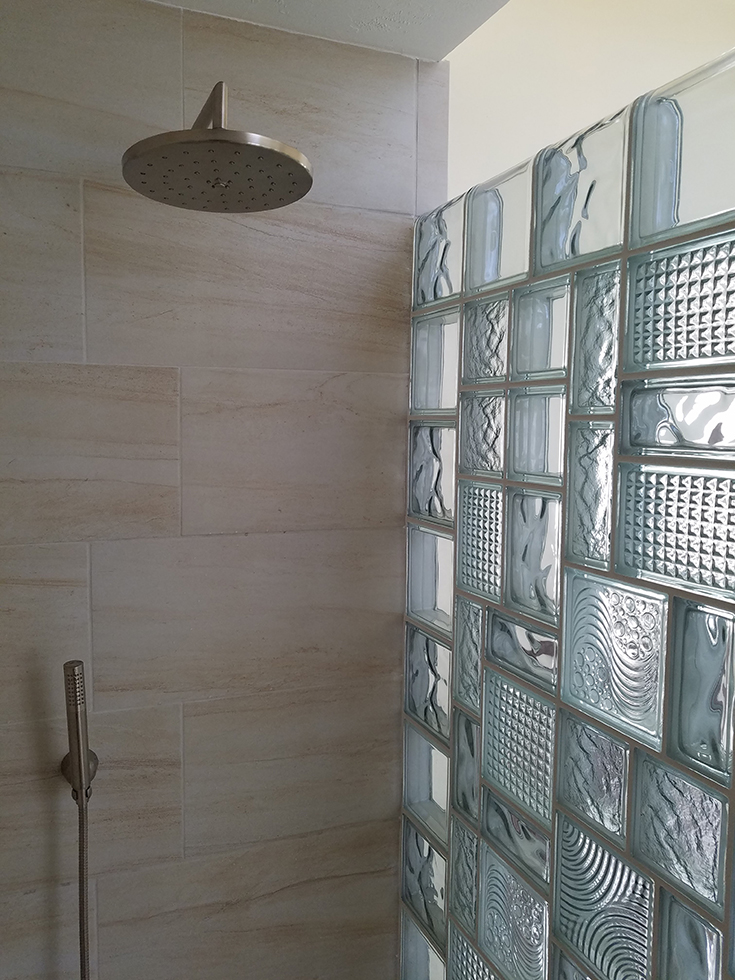 The price to add colored glass blocks to a shower wall

Whether you want vibrant colored glass blocks or softer pastel shades, your wall will not be generic when you add color. 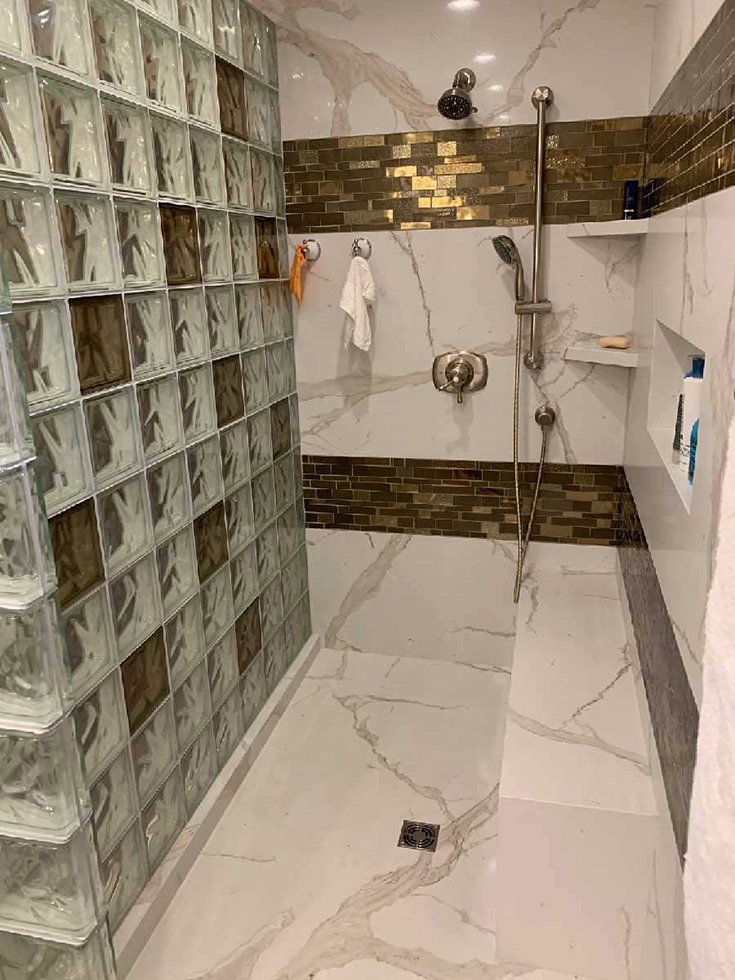 The price to add frosted glass blocks to a shower wall

Since glass blocks can be ‘frosted’ (or sandblasted) to an existing block, this (aftermarket) premade unit is not as expensive (and will give you a lot of privacy) vs. a standard clear glass block wall.

I’d recommend you only frost the ‘bathroom side’ (not the shower side because frosted blocks are harder to clean). Add from $6 to $10 per side per block for frosting (no, not cake frosting) to a prefabricated glass block shower wall. 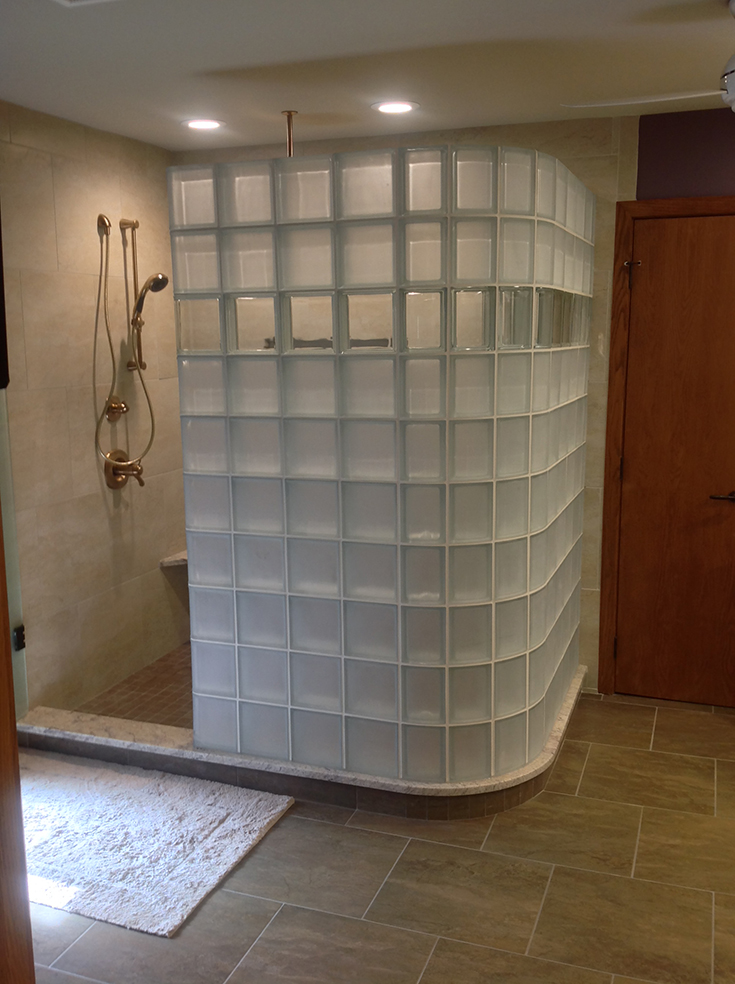 You don’t want to feel a glass block wall which dominates your room.  This can be a big problem in a small bathroom. Or perhaps you want to create a small separator wall between the john (‘er toilet) and your vanities for more privacy. 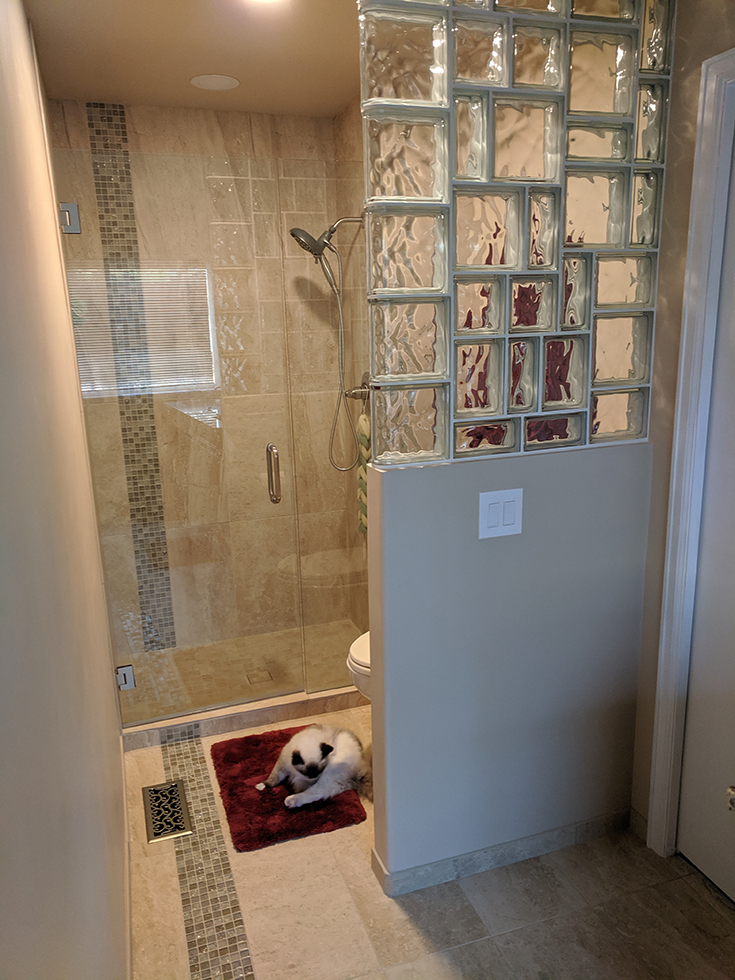 A perfect way to do this is to use ‘double end’ glass blocks in a ‘step-down’ layout. These gently sloping blocks add style, maintain privacy, but do it gracefully. These double curved glass blocks made into sections will add from $25 to $35 per double end block you have. 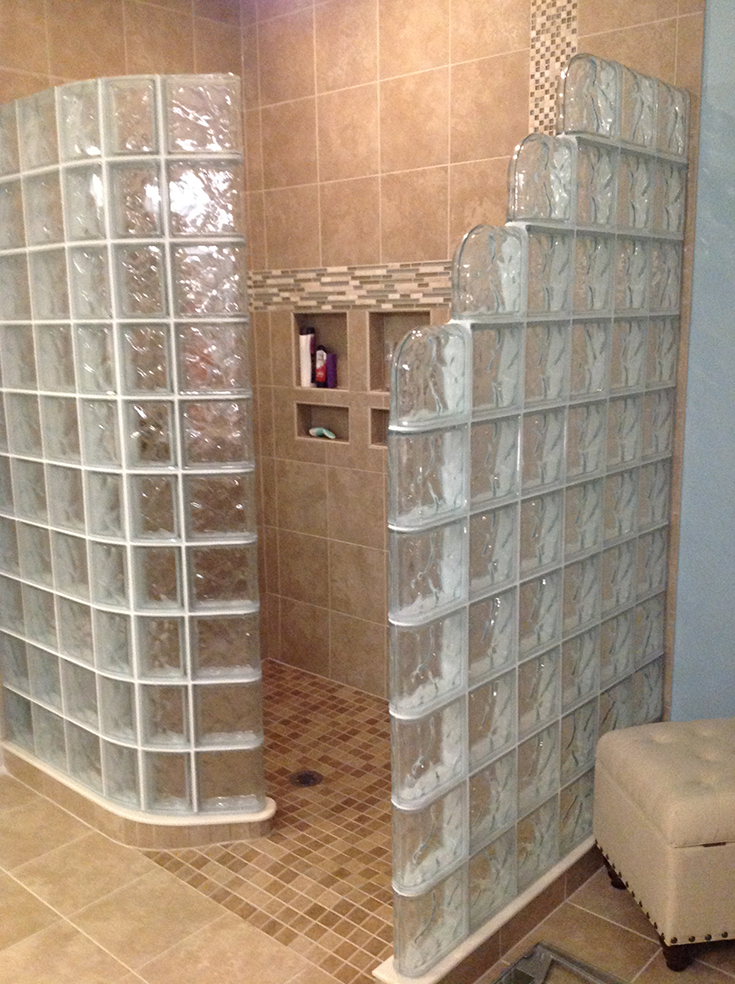 While knowing prices is critical to see if you’re even in the ballpark to afford this project, you’ll also want to make sure your design works and doesn’t cost more than it should.

Given this concern I’ll give you 5 design mistakes you don’t want to make so you get the best bang for your bucks.

80” high (assuming you’ve got a standard 8’ ceiling) is recommended for a glass block wall so water doesn’t come over the top. When I get people asking for 5’ shower walls, I know unless this project is for their 5-year-old daughter, it won’t ‘live well.’ They’ll not only have to invest in a wall topper (something to cap off the wall), but shower water will easily find its way over the top of this short wall and onto the bathroom floor.

For a full-sized glass block shower, go with a 10-block high (or 80”) system like you’ll see below. 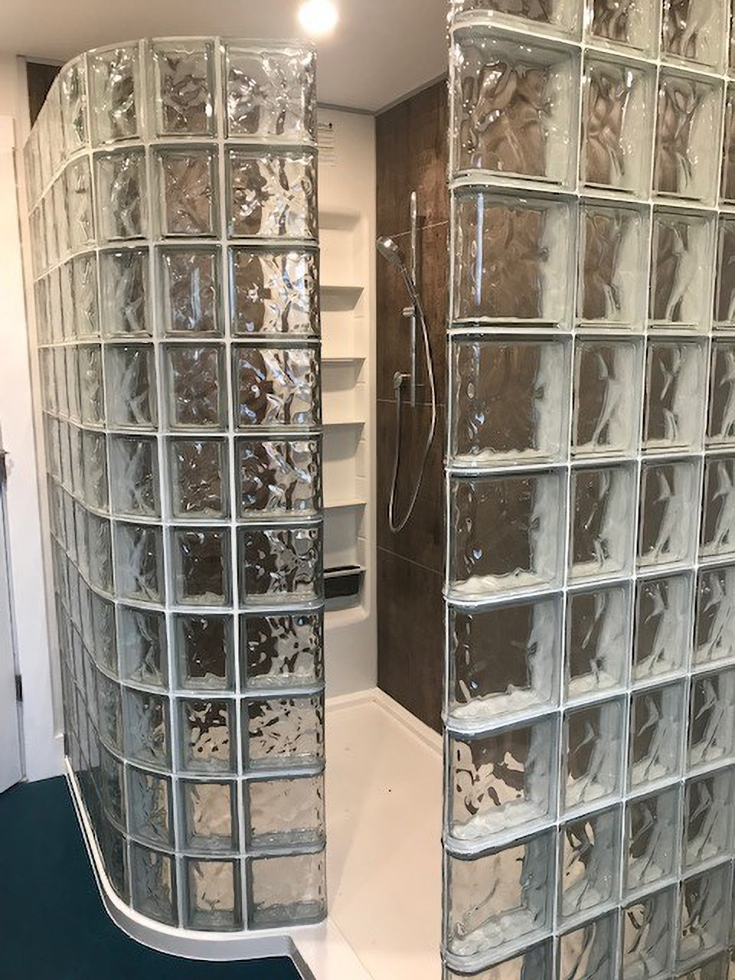 OK – my Dad used to say, “Michael, you can’t put 10 lbs. of s*** into a 5 lb. bag.” This same ‘flowery’ logic is true for a glass block wall. If you try to make a wall which is too long you won’t have room to walk in. I recommend an opening from 20” to 24” wide unless you’re designing for someone using a wheelchair or walker, then the opening should be between 30-36”. 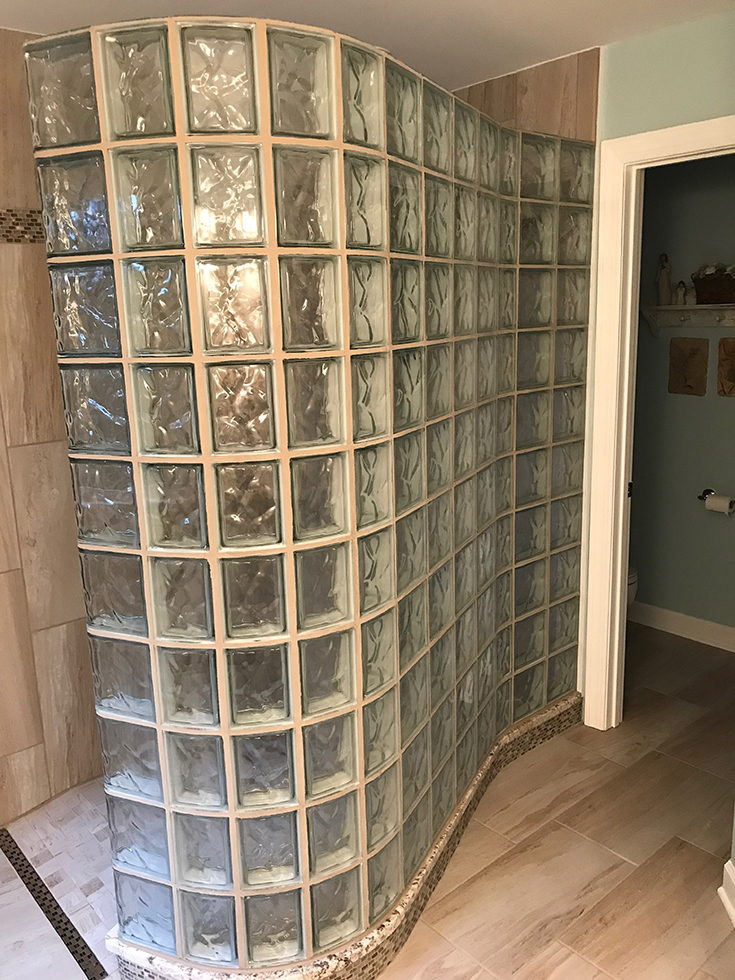 I’ll be honest here, when I get a call from a contractor or homeowner and they say their shower base is already built and then tell me they want a curved glass block wall, I start to shake like I’m livin’ through 8.0 earthquake. Here’s what I know.

Glass blocks can be a pain (yes – this is coming from a guy who sells prefabricated glass block shower kits and has a team who installs them) because they can’t be cut on the job site.

So, when you’re doing a glass block shower you have to do a ‘Stephen Covey’ and ‘begin with the end in mind.’ Design your shower pan to fit your prefabricated shower wall panels. Yes – our company sells pans to fit the walls (and yes, it’s a shameless plug, but you’ll thank me for bringing now so you don’t screw up later).

Figure out the shape of the glass block wall first, then design a shower pan to fit it. When you do this, you can make fun designs like the one below.

Glass block design mistake #4– Assuming anything is possible. And not to be ‘Danny-Downer,’ but it’s not!

Here’s Opinion #1) I think we have the best glass block prefabricator in the country. He’s a wacky dude (like me) whose name is Kevin.

Here’s something else I can tell you. Kevin has built some of the funkiest glass block walls shipped across the country. Many of these designs have been ‘pinned and repined on Pinterest’ (like this multi-sized and colored glass block wall shown below. 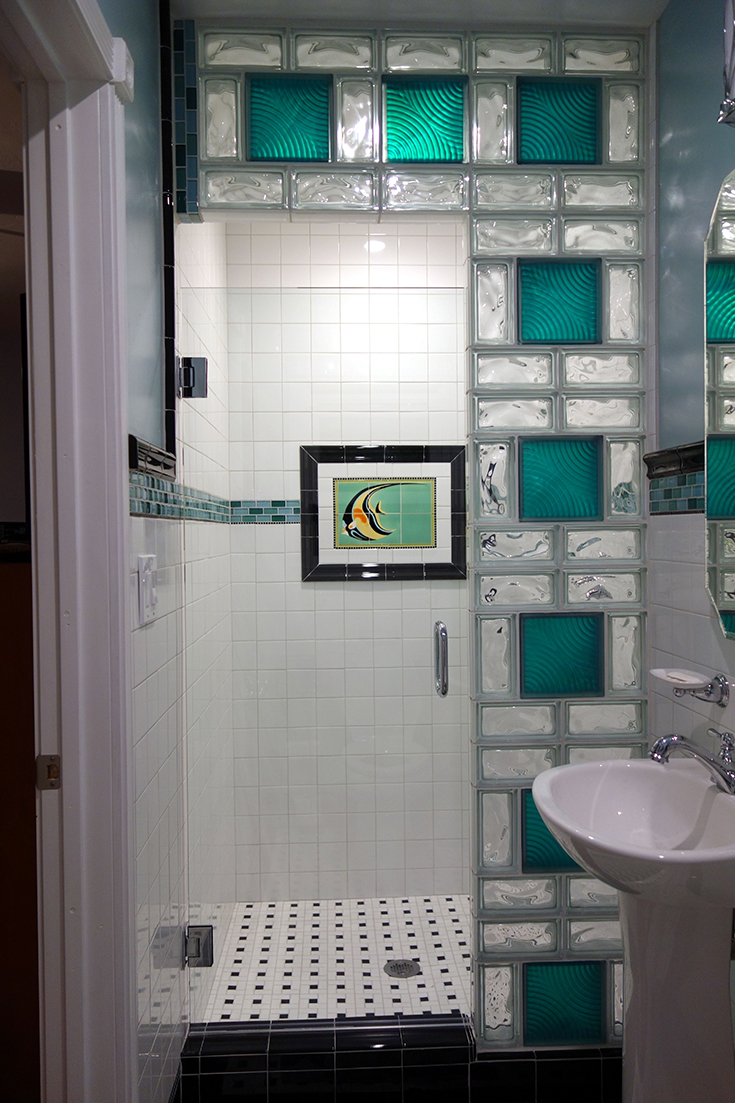 We’ve shipped these systems across the country (and even outside this country). Kevin and I try hard NOT to tell people NO. If it can be done – Kevin wants to build it – and I want to supply it to you.

However, sometimes I’m forced to ‘throw cold water’ on O.P.I. Not sure what OPI? It’s Other People’s Ideas. I need to be Danny Downer. But why, you may ask? Here’s why.

While glass blocks come in a wide variety of patterns and sizes there isn’t enough volume for the manufacturers to make all the designs in all the shapes (curves for a radius wall, finished end blocks etc.) and sizes. And this is where things get confusing. You don’t know which blocks come in what sizes, patterns and shapes.

So, here’s what I recommend. Before you get too far in your design call 877-668-5888 or email your design concept. We’ll let you know what’s possible, so you don’t waste your time. And then I (or one of our other glass block designers) won’t have go ‘Danny-Downer’ on you.

Glass block design mistake #5– The biggest mistake of all. You let ‘stubborn guy/gal’ disease get in your way

Whenever you do something (‘er design or install a glass block wall, for example) for the first time, let’s face it, you’re a rookie. You’ve not been down this road before. You don’t know a ‘finished end’ block from a ‘hole in the ground’ (as the saying goes).

So, IMHO the biggest design mistake you can make is to rely on your own design expertise (especially if you’ve never done this before). Let an expert glass block designer (and I know a few on my team– and hopefully after all these years might even resemble one myself) assist you. They’ll ask the following:

If you don’t have a clue how to design this shower or base, they’ll take the guess-work out of the process for you and we’ll give you our humble (or not so humble) opinion on how to make this project work.

So, the biggest mistake is to not get help. Don’t be stubborn. Get help.

And to put in the infamous words of that HUGE star from the 70’s, Mr. T, “I pity the fool who doesn’t take advantage of this free advice!’ Call us. Email us. We’ll be honored to help.

So, now that you know what a glass block prefabricated shower kit is, and know how much they cost and the dumb design mistakes you don’t want to make are you…