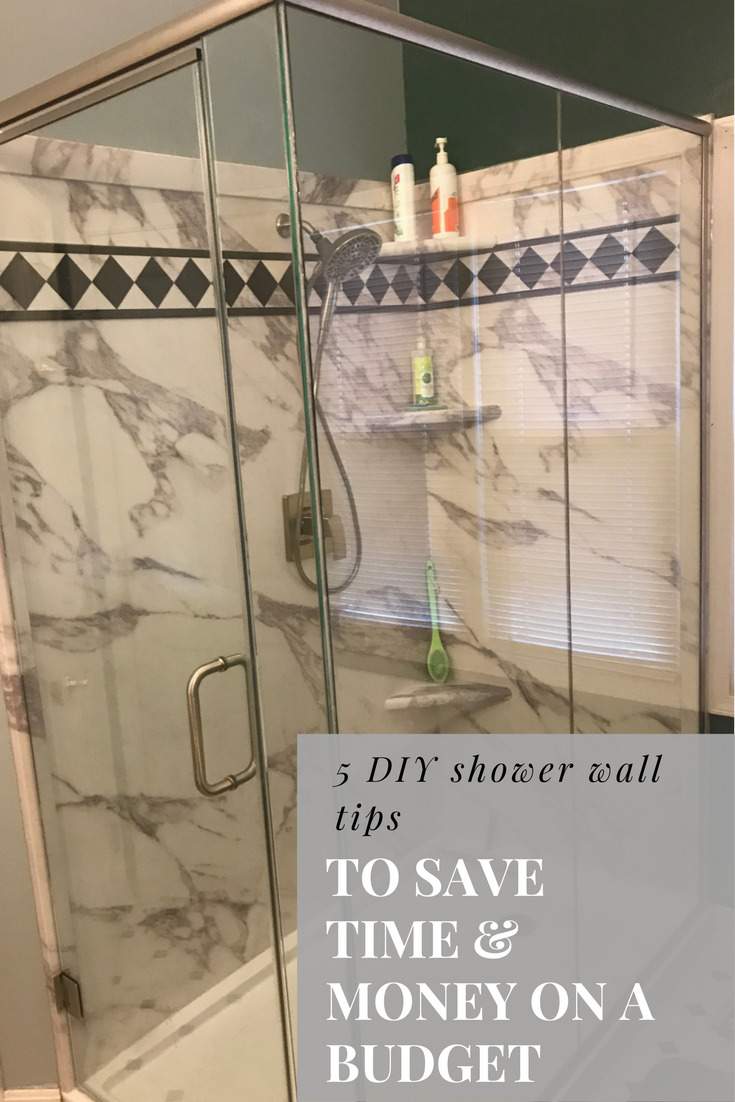 Have you ever worked on a DIY shower project and realized (or your wife, husband or significant “utter” made you realize) you really screwed up? You watched the money get used up, and your aggravation made you want to throw up, when these errors occurred:

DIY shower projects can be a pain in the butt!

The question becomes how can you save money doing a shower wall project yourself and live to tell about it without punching your walls in frustration? With the challenge of finding contractors– you need to know how to do projects yourself and still feel good about the end result (and meeting your budget).

Instead of going into this shower project blind now and getting ticked off later, you need to get “tipped off” now (read and learn tips which save you time and money) so you can sit back and enjoy your success (and relaxing shower) later.

I’ve seen (and heard) the frustration of many a DIY’er in my days. My goal in this article is to dish up 5 practical tips about shower wall panels (and the materials surrounding these panels) to save you time, money and aggravation. Let’s check out the 5 tips.

In most cases if you buy crap…. well…. you usually get crap. Sure, you can purchase an FRP (fiberglass reinforced plastic – it even sounds low quality) 48” x 96” sheet at the big box store for $24.97 in all its .090 (wafer thin) glory. At the end what do you have? A wall panel which is too small for your shower (a large percentage of showers need at least one rear wall wider than 48”). A wall panel system which you’ll need to find some trim pieces which look OK for the finished edges. A finished product which looks as good as what you’ve invested in it.

If you want a nice (but not too pricey) shower wall panel system look at decorative ¼” thick PVC composite panels or even 3/8” thick laminated shower wall system. In many cases they are not as expensive as you might think (although a cheap tile system you self-install may still be cheaper). 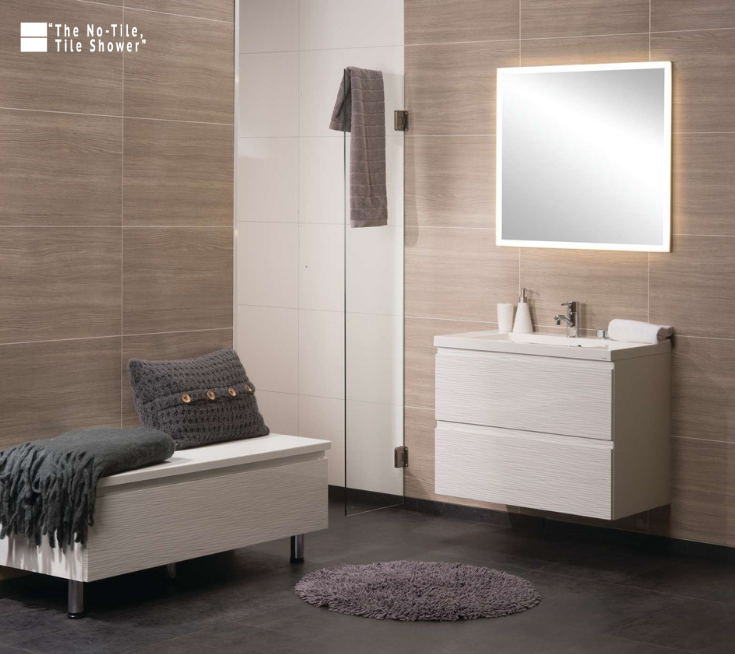 Conclusion #1 – If the shower wall panel prices look too good to be true – they probably are.

Shower wall tip #2 – If you can’t find a stud (or a good-looking family member) to help you– you can at least save money by measuring stud to stud. 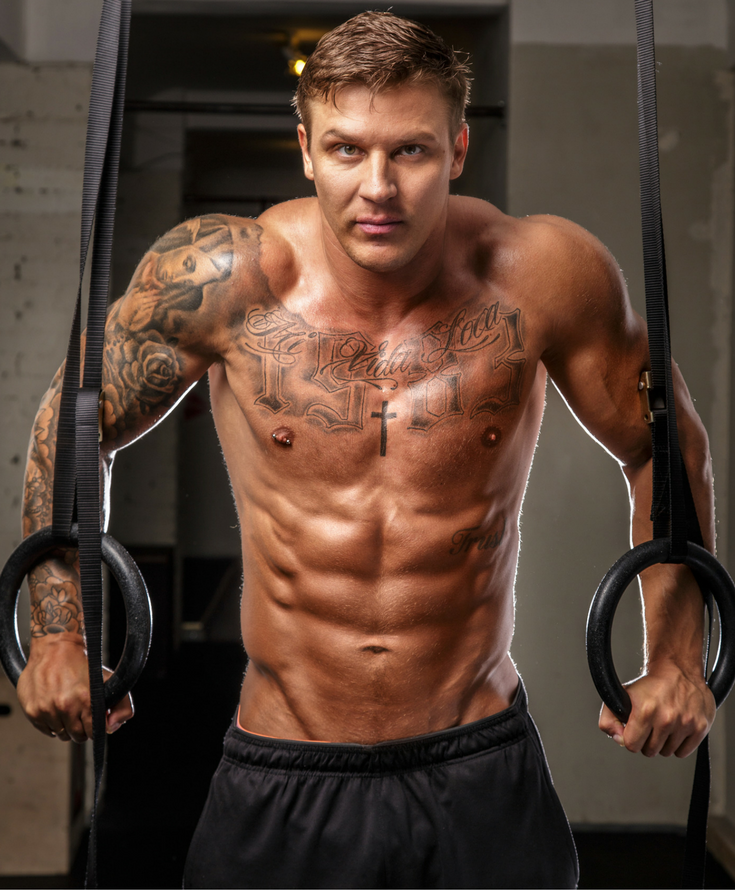 This guy is probably not helping you with your shower – he’s spending too much time working out!

It can be helpful  to get family members to help with a DIY shower wall project (shower wall panels and bases are simpler to do with assistance), but nothing will save you if you don’t (as they say) measure twice so you can order once. A common mistake I see with DIY jobs is owners think they need a custom sized shower kit – when they don’t. The reason is they are taking the wrong measurements.

To get the right size for your shower kit the correct measurement is from stud to stud. Now – I know you can’t get this until the spaced is torn apart – but you can at least estimate it (usually with a high degree of certainty). For example, if you have a standard sized tub you’re looking to convert to a shower you’ll likely have a measurement (inside your old dirty tile) of about 58” to 58 ½”. This project (after the tile and backer board is gone – is a 60” system.

Conclusion #2 – Before you buy a custom-sized shower panel kit explain to your vendor where you are getting your measurements from. Maybe a standard kit will work.

Shower wall tip #3 – Don’t think only about how it looks today, picture yourself (or your angry significant other) cleaning this doggone thing tomorrow

I love the look of beautiful new tile shower in a custom builder’s model home. But let’s get real. If you’re not the one cleaning tile wall grout joints (or even crazier yet – the ceiling) is a tile shower what you want to put yourself through – week after week, year after year?

Will a decent (see shower wall tip #1 for what’s I’d call not decent) shower wall panel system cost you more in the short run. Probably. Is it worth it in to cut your time and aggravation in the long-run? Usually. If you’re looking to sell this home in the next year – then put in cheaper tile because it won’t be your cleaning cross to bear. If not, take a close look at grout free shower wall panels ( cultured stone and a laminate system are pictured below). 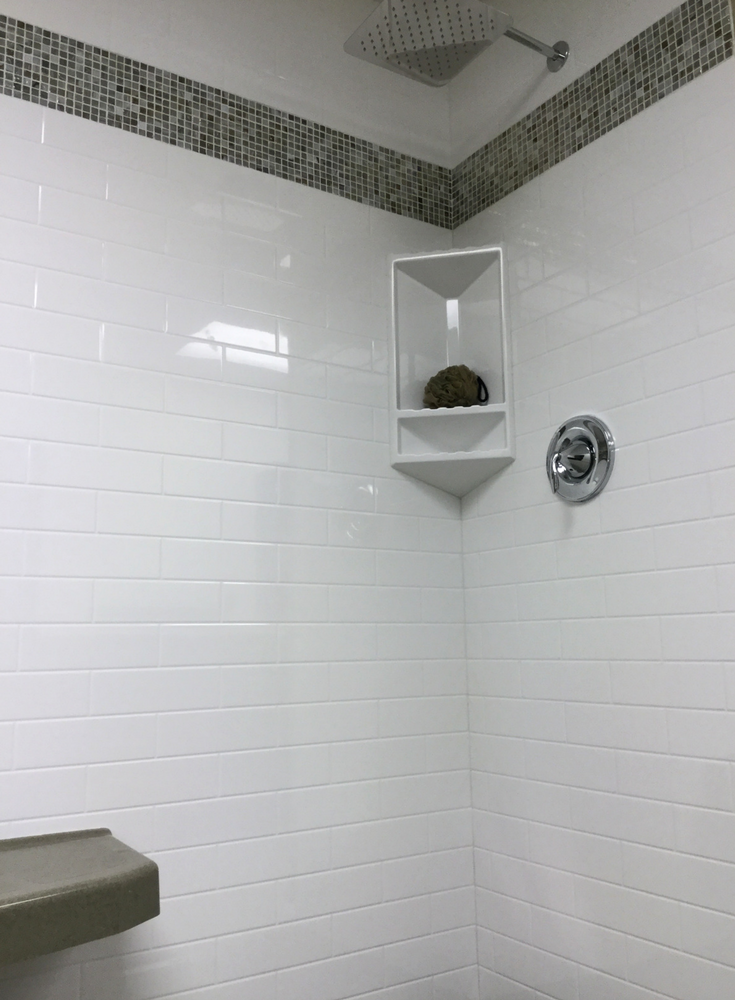 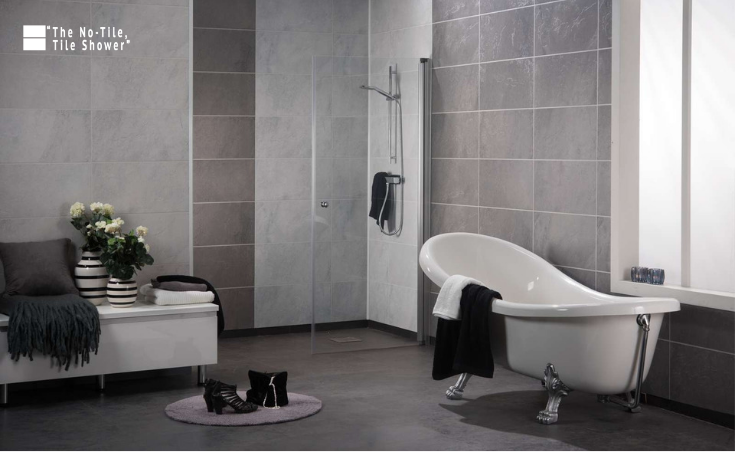 Conclusion #3 – Don’t underestimate the hassle of cleaning your shower when choosing a shower wall system. Know how long you want to stay in this home to lead you to the right shower wall selection decision.

Many times, when people call to inquire about shower wall panels and base systems they’ll begin by telling me, “Mike – I have the project demoed and my cement board is up. Now, I need to get my walls and a shower pan.” I know immediately they have wasted some money. Not necessarily because they bought the wrong products – but because they are doing the job in the wrong order (note: the wall backer board should be installed before the shower pan goes in). What’s worse is a shower remodeling project done in the wrong sequence can lead to water finding it’s way underneath the shower pan. That will become a total disaster.

You’ll save time and save money – when you do the job in the correct order. Here is the simplified sequence of shower remodeling steps you need to follow. 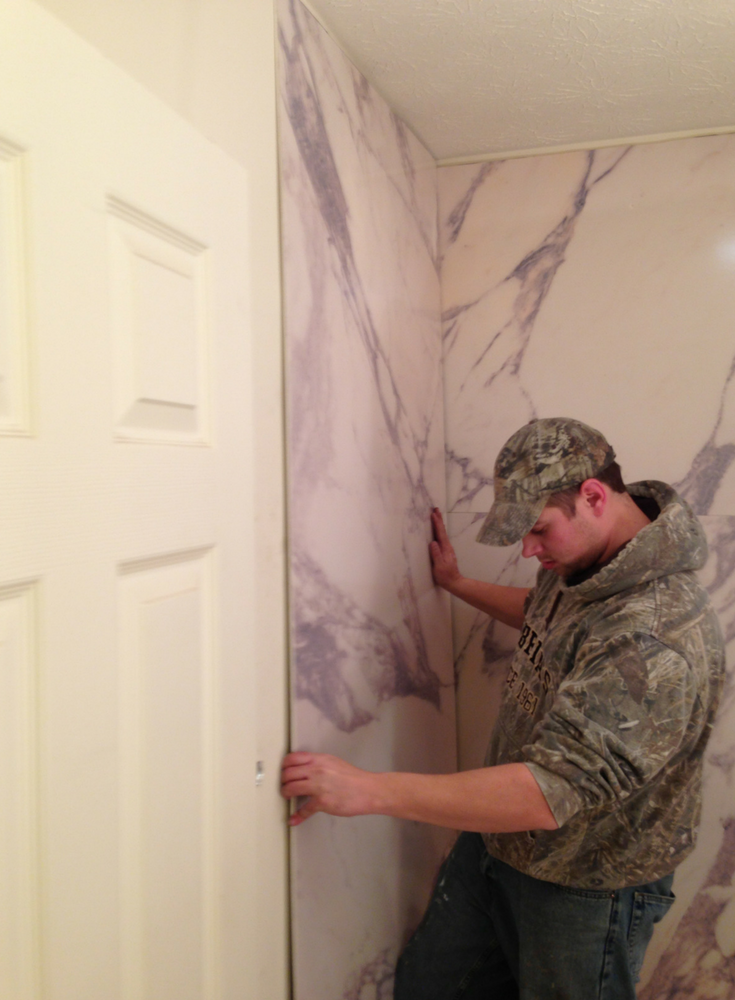 Conclusion 4 – Having a game-plan and knowing the steps up front will save you money and aggravation of pulling products down (or worse yet) tearing out an entire shower system which leaks down the road.

Shower wall tip #5 – Don’t deal with Bob H. or Susie W. in the plumbing department (or anyone who lacks patience and won’t give you their personal cell phone number).

You need to be able to “ask away” – without the fear of someone on the other end wanting to blow you up. To successfully install a DIY shower remodeling project you will need help and input (before and during the project).

This is why I say don’t deal with “Bob H.” or “Susie W.” in the plumbing department (you know Bob and Susie – they are the not very knowledgeable people who have no vested interest in your project). Now – I don’t have anything against Bob H or Susie W. It’s just that you need to know you can call this person (directly) and get answers to your “in the moment” installation problems. If you just buy the stuff and can’t get a hold of Bob H or Susie W (or they are so frustrated with you already they simply blow you off) you’re going to have a problem. 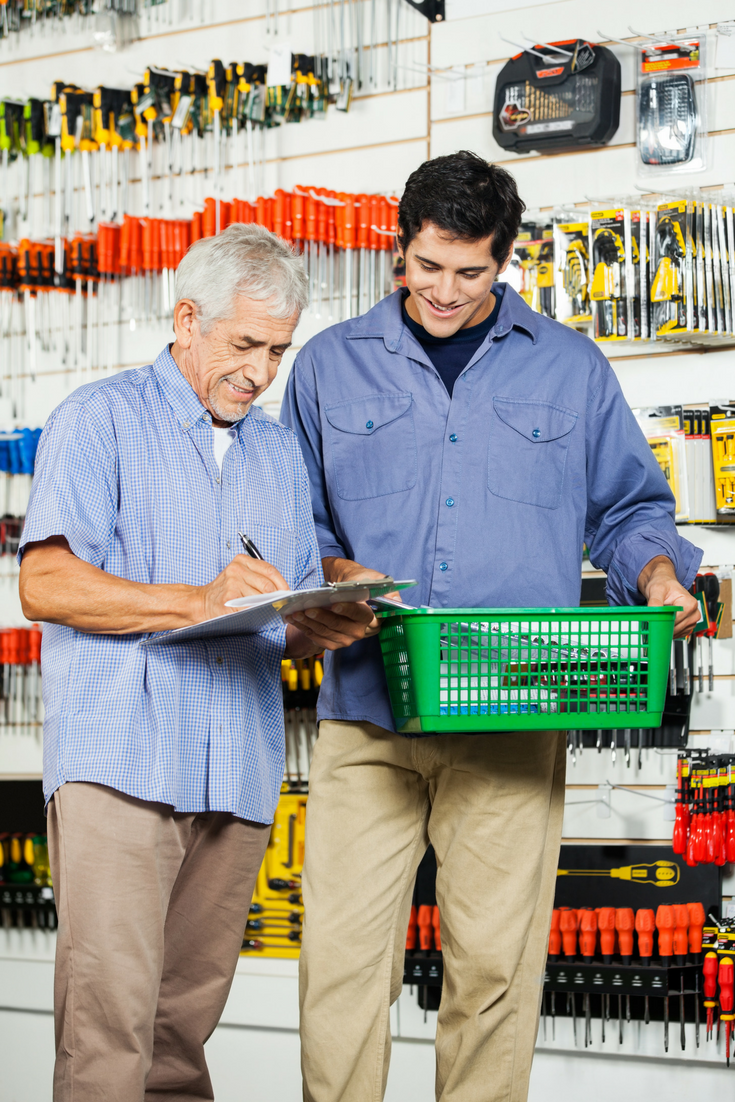 These guys look happy now in the home center store – but will they get the personal support they need later?

Here’s what I recommend. When you’re calling to get input on your DIY shower project see if the person on the other end of the phone will give you their first and last names and cell phone number. Are they patient with you? If not – I suggest simply not buying from them or their company. If they aren’t helpful during the sales process, they darn well won’t be helpful when the DIY remodeling crap hits the fan.

Conclusion #5 – Buy your DIY products from patient people who will give you their first and last names and personal cell phone numbers.

The DIY shower journey is not a simple road. If I can impress one thing to you I would say before demoing and buying products, don’t be afraid to take more time planning, researching and envisioning what the future living with this shower will look like. You use the shower every single day. You not only want to be mindful of your budget today – but you want to be thoughtful about your maintenance time and eliminate future expenses.

If you need assistance with a shower remodeling project me and my team will be glad to help. You won’t have to call the “generic” Bob H. or Susie W. You can call me.  I’m Mike Foti or if you don’t want to deal with my wacky personality, I’ve got staff members who can help you.

Trackback from your site.