Written by Mike Foti on June 3, 2021. Posted in Bathroom Remodeling. 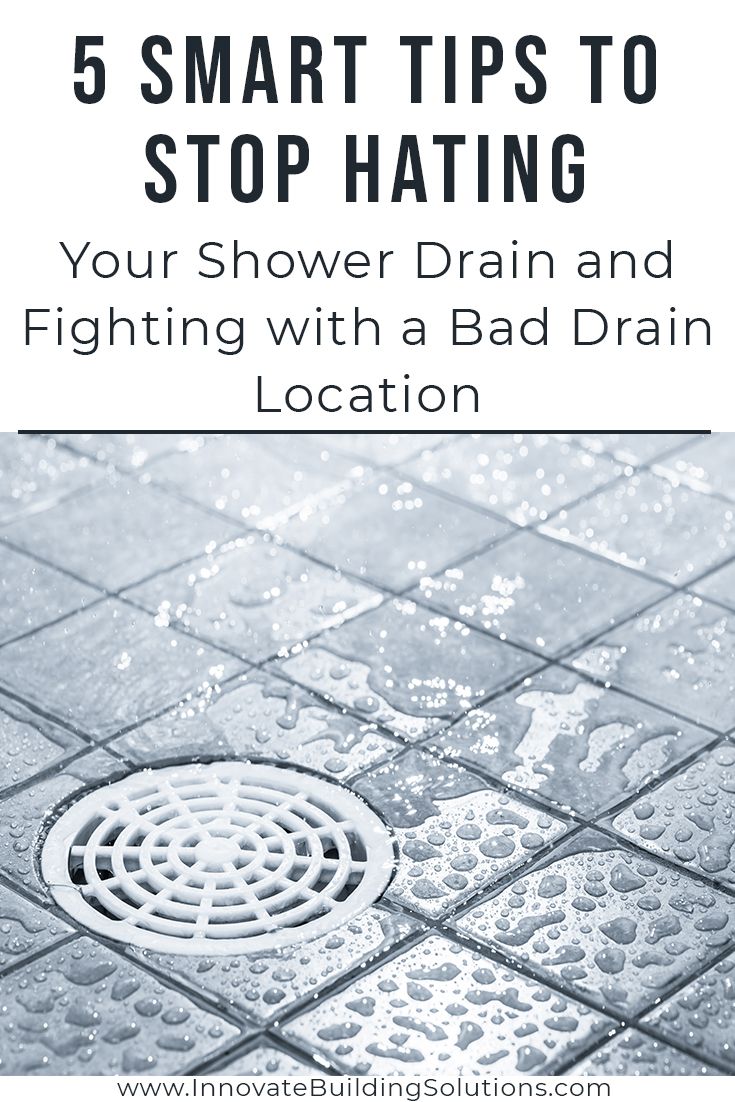 I bet you’re saying right now – WOW – I get to read an article about shower drains and figuring out a smarter shower drain location. Now I’ve earned the right to say those epic words of Chaz Reinhold (Owen Wilson) in the hilarious movie Wedding Crashers who said, “I’m living the dream!”

OK, in all seriousness shower drains are a ‘necessary’ feature you love to hate. After all you need a drain for your shower to work right. However, it doesn’t stop you from griping about the shower drain problems you’re dealing with today:

The bottom line is this.

The right drain (and drain location) can make your shower floor look sexier (hey – did I actually say that?), ‘live’ better AND take the hassle out of the installation.

Shower drains – while not the ‘hot topic’ of a bathroom remodel will impact how well your shower holds up and how easy it is to use.

In this article my goal is simple. I’ll give you 5 common-sense tips to choose the best shower drain (and figure out the best drain location). I don’t want you complaining about your shower drain …. EVER AGAIN!

It always sounds like it’s a great idea to buy a standard (‘er this is secret code for lower cost) shower pan with a common drain location. After all who wants to spend bookoo bucks on an expensive custom shower pan. That would be nobody. 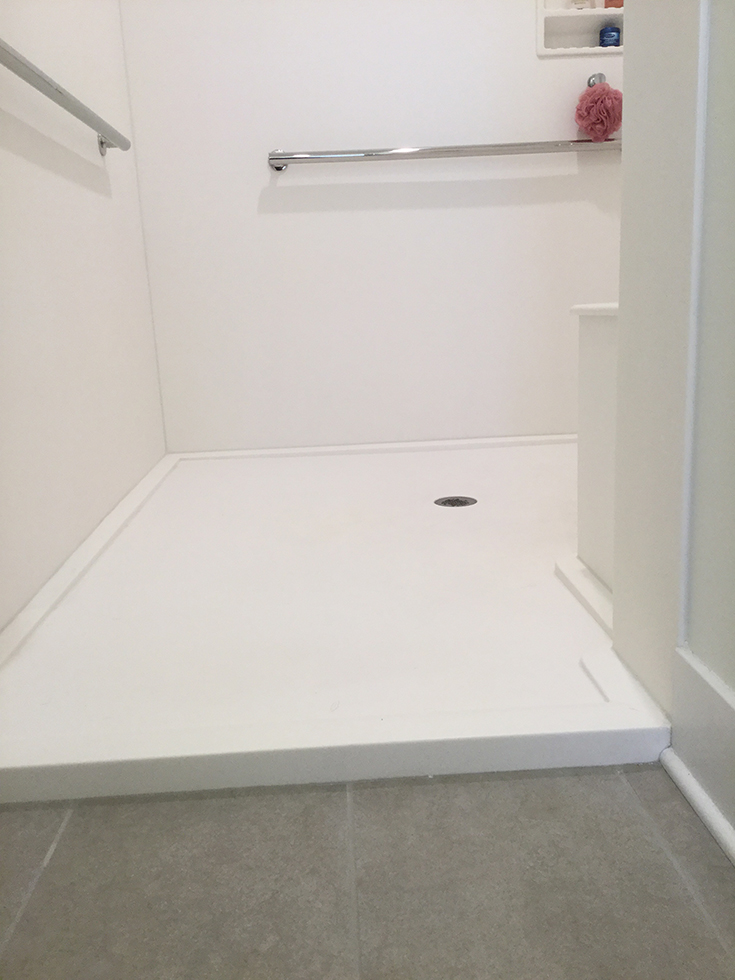 And yes, I know the word ‘custom’ makes you penny-pinchers out there break out into a sweat.

So, you go to your local home center. You pick up a standard, off-the-shelf, fiberglass shower base. You got such a deal. It’s ready for you (or your contractor) to install. Then when installation day arrives you find out the holes in the middle of a joist. And worse yet, the cost of moving the plumbing to make it work is going to set you back an (un)pretty penny. You think to yourself, “Maybe the kids really don’t need that college fund anyway!”

You don’t want this to happen to you.

When you’re thinking about a shower pan (and it’s all important drain location) it’s critical to find out where your joists are BEFORE you buy a shower pan. DO NOT end up with a pan you can’t use because the drain hole is in the wrong spot!

In many tile installation forums, you’ll be advised to locate the drain in the center because it’s simplest to slope a tile shower drain in the middle (if you or your contractor are doing it by hand) to make the pitch consistent. However, in your common 48 x 36 size a center drain will also force you to stand smack dab in the middle of the drain. This not only isn’t comfortable, it’s also downright nasty when your partner or family members hair causes the drain to CONSTANTLY be clogged!

First, I want you to know it doesn’t have to be a pain to slope any drain. It CAN be easy whether it’s for a tile shower pan or a cultured stone shower base. You see for a tile pan you can buy a premade waterproof ready for tile base where the slope is already built for you (so you won’t have to worry about puddles anymore). And with a cultured granite shower pan – the slope is built into the pan with no tiles. AND the bonus is you can blow up cleaning grout joints FOREVER! 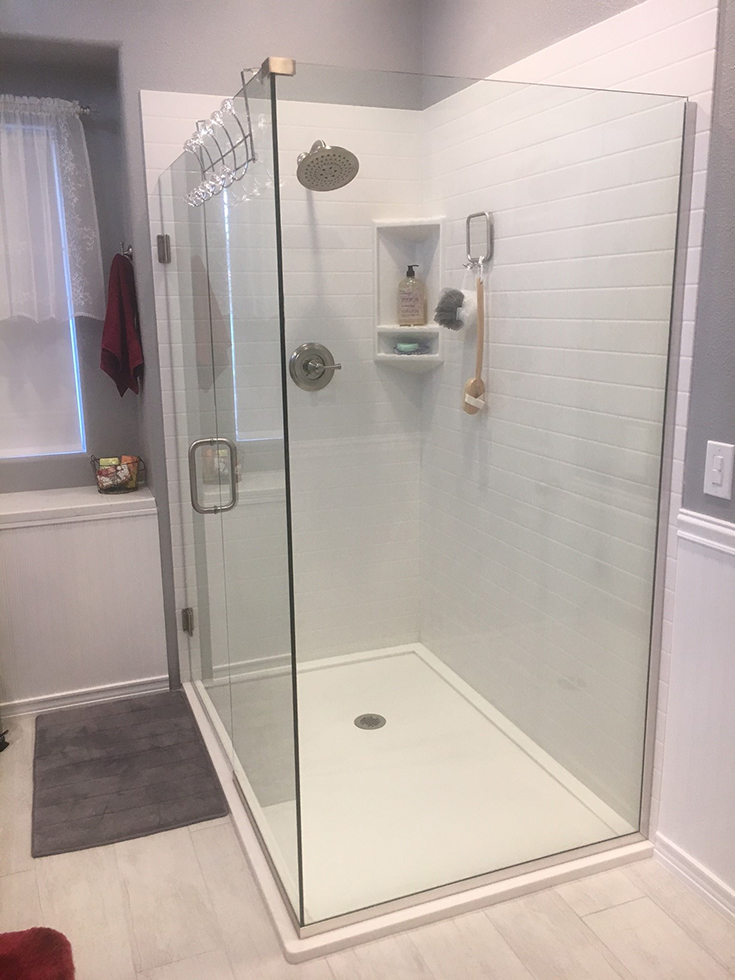 At the end of the day (and at the beginning of the day also) it’s best to locate the drain hole where it’ll work best (and feel best) for you. I recommend the drain (assuming no joists are in the way) be 12” (or so) from the shower head wall in front of you when showering (and centered side to side). This keeps you from standing in the drain and pools of water when it (inevitably) gets clogged.

With this reference to the Close to the Edge album by Yes (a popular rock band in the 1970’s and 1980’s), I know I’m dating myself. I might also be conjuring up images of guys in mullets – and Yes -pun intended- I used to resemble this remark as you can see in the image below… I’m the guy on the right.

But a cool idea to improve the looks of your shower pan – and find a super-smart drain location – is to place the drain ‘close to the edge.’ You see with linear drain systems (and for those of you not familiar with linear drains, they’re narrow, long rectangular drains which allow you to slope the shower pan in one direction vs. 4 directions with a standard round or square drain) you can move all the water towards the edge (either towards the side wall or under the shower head wall) and away from where you’re standing. 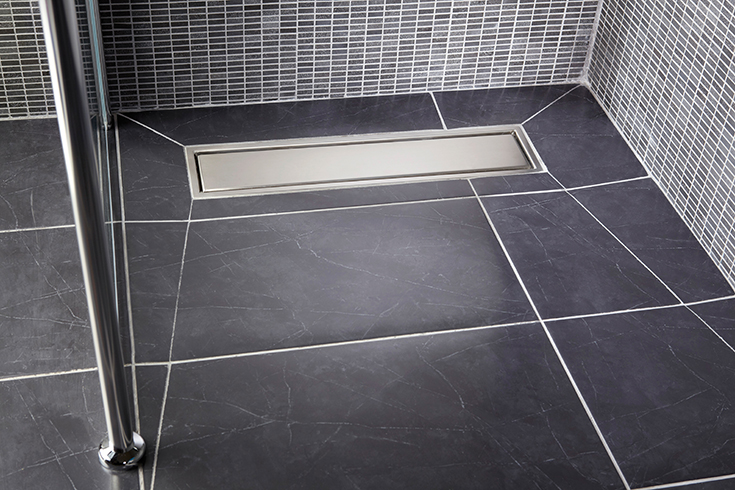 Moving a shower drain is not only time-consuming – but in some cases it can be darn-near impossible if the supporting joists are located where the drain location of the new shower pan is supposed to go.

It’s for this reason one smart drain location YOU SHOULD ALWAYS consider is keeping the drain where it is today. This is one primary reason you’ll see standard 60” x 32” shower pans with ‘side drains.’ You see this pan (with a drain at the left or right sides) is designed for tub to shower conversion projects. The drain is located where the old tub drain was … 8” or 9” away from the tub faucet wall.

Using this same ‘side drain’ location not only saves you or your contractor time and aggravation –it also doesn’t put the drain in a place where you’ll stand in the middle of it (note: most of us stand about 20” to 24” from the shower head wall – so an 8” to 9” drain location lives well).

Also – one fact many people DO NOT REALIZE is you can buy waterproof ready for tile pans and custom cultured marble shower pans with the drains where your existing drain is located today. This eliminates the time-consuming process of building your own custom tile pan (and worrying this ‘hand-made’ base will leak down the road). 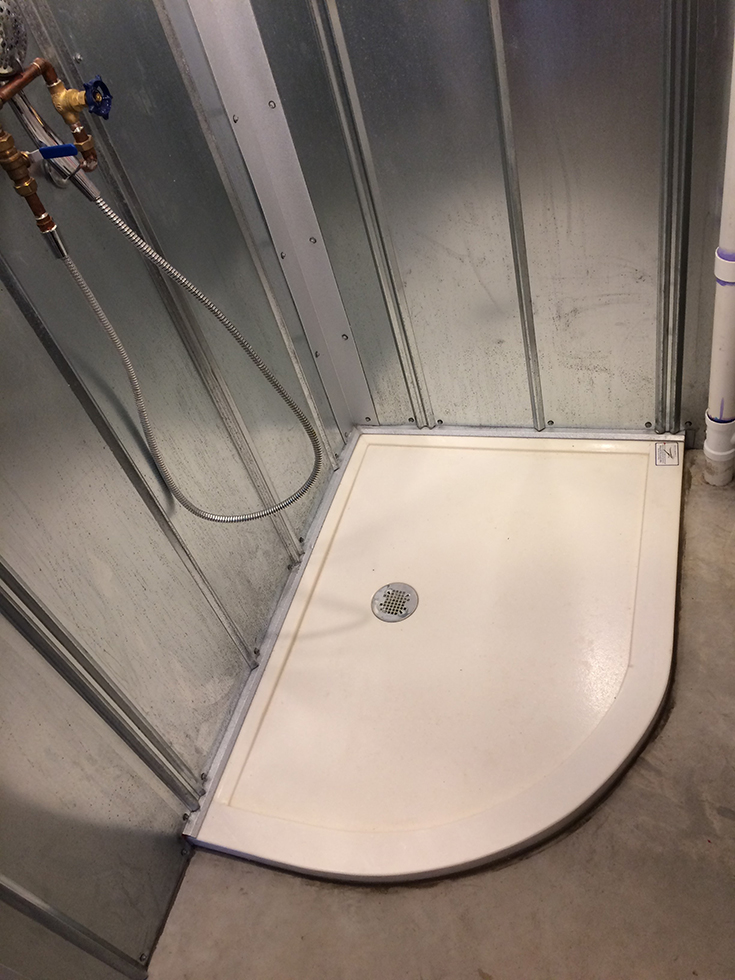 If your existing shower drain is ‘butt-ugly,’ raise your hand! And I can see (virtually) many of you in our ‘studio audience’ are putting your hands up right now (OK – you know that ‘studio-audience’ line is bunk – but it sounded fun).

And if we’re being real, it doesn’t take a brain surgeon to know the ugliest part of shower pans are the ugly round, pitted drain strainer covers you ‘enjoy’ (sarcasm intended) today. Drains ARE NOT (usually) the shower pan feature you want to feature (and yes, I know that’s redundant).

However, for your next remodel you don’t have to fear living (and looking) at ugly drains any longer. You see today you can ‘outsmart’ the ugly drain of your past.

You can make your new drain disappear faster than you can say David Copperfield!

But how, you ask? 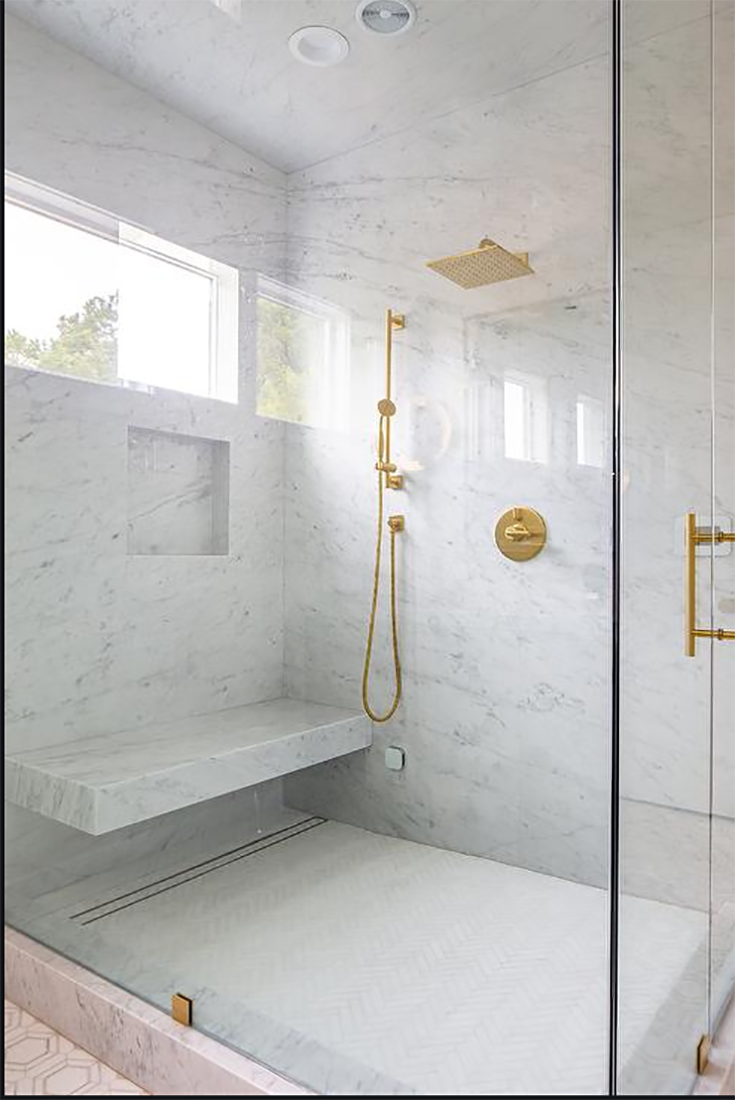 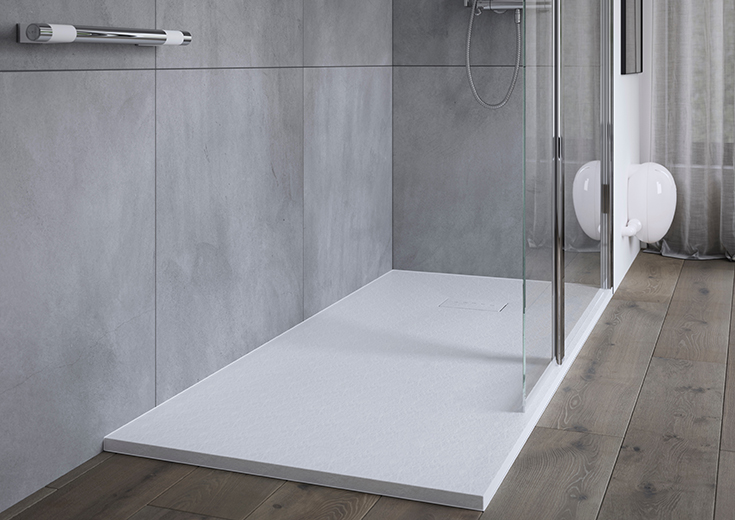 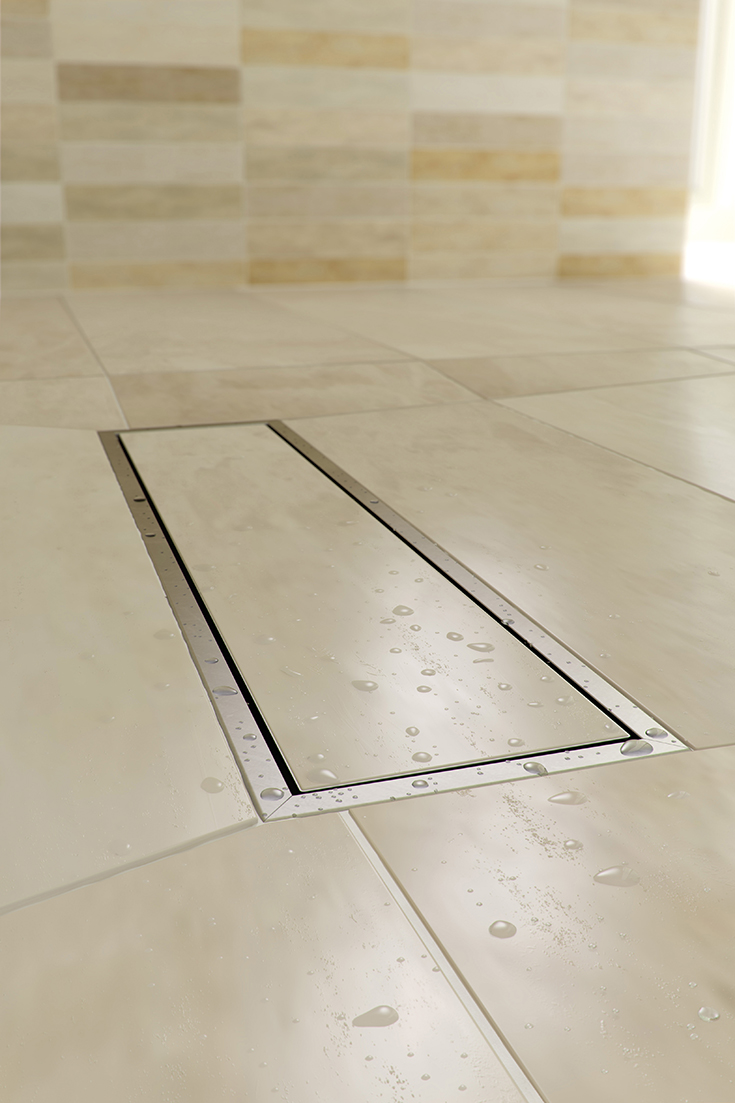 So now that you’ve read this ‘exciting’ post (hey – I did my best not to make this topic not too ‘draining.’ And as Larry the Cable Guy would say, “that there was a B-A-D pun!” I hope you see finding the right shower drain (and drain location) is not only important – but can also help your shower look cooler, live better, AND last longer (and even prevent costly mistakes).

I know there’s a lot to learn not only about shower drains, but also about shower pans and shower wall surrounds as well. Towards this end me and my team would love to help (note – we wholesale shower supplies nationwide and install shower stalls in Cleveland Ohio).

How else can I help you?

If you want to connect with me and/or learn more about remodeling, but don’t want to put up with my wacky humor… I get it. Follow me on LinkedIn @Mike Foti for the more ‘buttoned up’ business guy version of me.