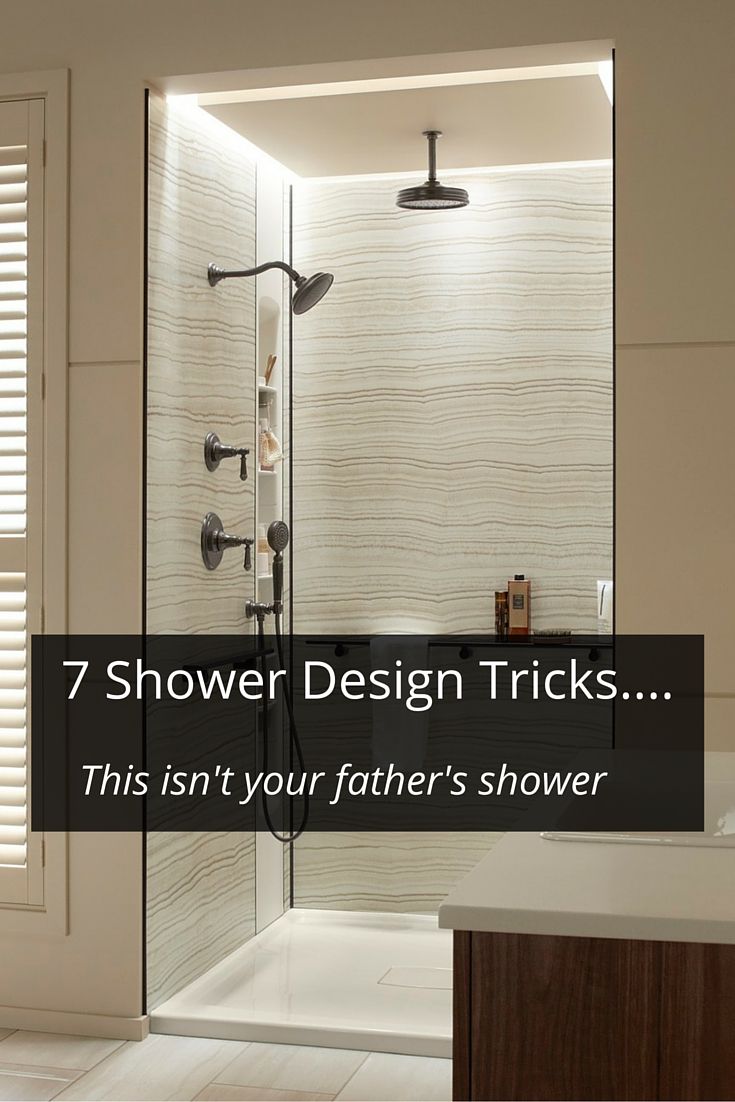 “This isn’t your father’s Oldsmobile” the commercial in the 1980’s proclaimed. What General Motors was trying to tell consumers (although this commercial might have backfired on them more than helped) is times had changed and the designs of their cars had to change with it. When I think of effective shower design which fits today’s family I think the same phrase could apply, “This isn’t your fathers shower!”

So – you may be asking, “Mike – what has changed that Dad or Grandpa’s shower no longer works?” Consider these 3 things:

As a result of these 3 factors you and I need showers which require less maintenance, improved safety and better design. Let’s check out 7 shower design tricks (and one bonus shower design trick #8) to help your shower evolve from your fathers’ old shower.

We’re starting in the United States to break the “walls” down of the shower or tub “enclosure.” What this means is the separate compartmentalized space which encloses the shower with stud or glass walls from the rest of the bathroom is being rethought. The one level bathroom design which is so prevalent in Europe and Asia (who have smaller homes/apartments) is growing in popularity. One level (barrier free) showers are safer to walk into with no curb to step over and use the total bathroom square footage more effectively. Many homes are converting a bathtub into a shower so the space can be easily used by all members of the family (regardless of age).

When my cousin Frank Foti (who is CEO of Telos Alliance today and a technical wiz at broadcast audio processing) was growing up he would spend hours at his Dad’s (my Uncle Sam’s) workbench learning how to put things together. When something didn’t make sense to Frank my Uncle Sam would say, “Think Frankie Think” challenging his young son to use his mind to figure things out. It was through this mental challenge that Frank’s technical genius was inspired. Just like Frankie at his Dad’s workbench shower design needs to be more thoughtful. For example one simple change our  Cleveland bathroom contractor division – Bath Doctor – recommends is to locate the shower valve as you enter your shower.

With this small change you don’t have get wet by turning it on with your body directly under the shower head. Good shower design eliminates the things which bug you about taking a shower. Simple improvements can make a better showering experience.

Showers are all about trading inches – space is tight – and every inch counts. When designing your shower use the wall cavities for recessed niches to make the shower more spacious.

If you lack room for a seat get one that can flip up and down. Excellent shower designers finds inches in a shower others didn’t know exist.

Hybrids are not just for cars – but for showers well. While many people love the idea of a walk in shower (to eliminate the hassle of cleaning a framed shower door or curtain) many feel they don’t have enough room for one. There is a cool hybrid option called a shower screen or a shower shield. These frameless glass pivoting shower doors make is simple to have a walk in shower – even if you space is only 48″ or 60″ wide.

This glass shower system has a 24” fixed glass panel and a 15” pivoting door. What is nice is you can use it to create a walk in shower in a 48” space. A more thoughtful design in a smaller space. How cool is that?

Why is so much tile used when people hate grout? Maybe we’re stuck in our father’s shower design choices – doing what’s been done for ages before? Maybe it’s what our contractor always recommends (if you haven’t noticed contractors are not noted for being the most progressive tools in the shed!). What is finally happening is shower wall panel technology has progressed beyond the cheap 1/8” panels you find at the big box store into more elegant (and thicker) units.

Some shower panel choices include solid surface, stone, a decorative PVC composite wall and even sleek contemporary laminate shower panels. You CAN have style, and get rid of grout at the same time! What’s nice is you can also use put these shower wall panels in an Airbnb rental or tub surround in your vacation home. And if you want a fancy herringbone shower surround (without the large cost of tile)- you need to check out the click and lock laminate panels.

While drains are obviously essential (the water has to go somewhere!) in a shower they are not normally where most people want the eye to focus (unless you use a cool linear drain with LED lighting …. I digress). How about making these drains visually disappear? New drain designs can use tile in-lays where they literally disappear.

If grout (as discussed in design trick #5) is public enemy number one, framed shower doors (and cleaning the gunk out of them) is public shower enemy number two. A simple way to get rid of this maintenance hassle is to eliminate the door. Even in a space as small as 60” wide (the standard tub size) you can put in a glass wall where the curvature of it’s design allows the water to bounce back towards the drain and eliminates a shower door. A glass block shower is one easy way to accomplish this. Also , by using a cultured granite shower pan you’ll also be working to cut down your maintenance at the same time. Now that’s a double-bonus!

Bonus Shower Design Trick #8 – Buy a complete shower kit so you know EVERYTHING works together AND you save money!

And if there ever was a place where you ARE like you’re Dad, its you don’t want to waste money AND you want to buy things which are built to last. There’s nothing dumber than looking to replace one cheap, plastic shower (or old moldy tile shower  with another cheap plastic shower or another (soon to be – old, moldy tile shower). No – you want a system which looks stylish AND is built to last. You don’t want to end up with a bunch of components which don’t work together.

It’s for this reason you need to look for a quality shower replacement kit. Although many of the ‘shower kits’ you’ll see on the Internet are either lacking all the components (and by all the components means the kit should include a shower pan, shower wall panels and shower door) or are downright flimsy. They have shower pans which flex when you walk on them, shower surround wall panels which are no better than the plasticky stuff you see at your local home center, and shower doors which are thin and wobble and will live like the one you’re looking to ditch today).

What you need to find is a complete shower kit which is sturdy, stylish and will outlive you! Fortunately I’m here to tell you these systems do exist. Like you’ll see below, you can get a quality shower kit which has durable stone shower pans, 3/8″ thick laminate shower walls and 3/8″ thick x 79″ tall shower doors. Don’t put up with replacing your existing cheap shower with a new cheap shower!

Clear advice on bringing your bathroom to the next level

I don’t need to tell you things have changed. The reality is today’s shower should not be designed like your fathers old-school shower! It doesn’t fit with today’s need for efficient design, low maintenance and improved safety. Which of these 7 shower design tricks (or the bonus trick #8) would help you the most? If you have questions about shower comment or call the numbers below.

For nationwide supply of innovative shower design products contact Innovate Building Solutions at 888-668-5888. For a bathroom or Cleveland shower remodeling project call The Bath Doctor at 216-531-6085 or in Columbus Bath Doctor at 614-252-3242. If you’re in the building business, click here if you’d like to learn how to become a shower wall panel dealer or call and ask for Mike at 888-467-7488.

In addition, if you’re looking for shower panels for student housing or wall panels for senior apartments or other multi-unit developments we’d be glad to help. The number to call is 888-467-7488.